-
The Australian Embassy in Manila, Screen Australia, and the Australian Department of Foreign Affairs and Trade in cooperation with the Ayala Malls Cinemas, Greenbelt and Ayala Center Cebu present the 7th Australian Film Festival in the Philippines from 5-14 November. 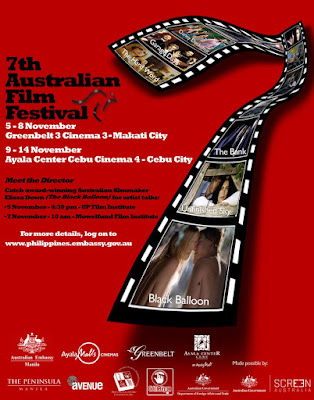 The 6 award winning films in the festival are:

The Black Balloon (PG 13)
Director: Elissa Down
Thomas and his family move to a new home. He has to start at a new school, all he wants is to fit in. When his pregnant mother has to take things easy, his father puts him in charge of his autistic brother. With the help of his new girlfriend Jackie, Thomas faces his biggest challenge yet. A story about fitting in, discovering love, and accepting your family that is funny, confronting, and ultimately heart-warming.
Selected Awards:
Australian Film Institute 2008 AFI Award – Best Film, Best Direction, Best Editing, Best Original Screenplay, Best Supporting Actress (Toni Collette), Best Supporting Actor (Luke Ford)
Berlin International Film Festival Crystal Bear - Best Feature Film
Film Critic’s Choice of Australia – Best Film, Best Director, Best Supporting Actress

Danny Deckchair (PG 13)
Director: Jeff Balsmeyer
An ordinary bloke rockets out of his loveless relationship into a new world in which he gets the chance to stand out from the crowd and fall in love.
Selected Awards:
2003 Film Critics Circle of Australian nominated for Best Supporting Actor - Female Justine Clarke
2004 Paris Film Festival nominated Grand Prix – Jeff Balsmeyer

Garage Days (R 18)
Director: Alex Proyas
GARAGE DAYS is a film about one kids dream to be a rock star. Freddy learns there is more to being a rock star than just drugs and tunes. He learns about friendship, babies and love.
Selected Awards:
2003: Sundance Film Festival (USA)

The Hard Word (R 18)
Director: Scott Roberts
Three brothers have found a uniquely profitable way to spend their jail time. Crime does pay, and no one gets hurt – until they discover the catch. When sex and greed come between bad cops and good criminals, the consequences are fatal –for some.
Selected Awards/Festivals:
2002: Filmfest Hamburg, London Australia film Festival 4 x Australian Screen sound Awards.

Screening schedules for Manila and Cebu can be found here.
Posted by Henry Bateman

Email ThisBlogThis!Share to TwitterShare to FacebookShare to Pinterest
Labels: You Need This