The Fiction of the Photograph 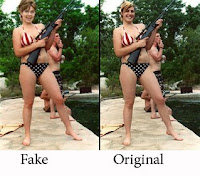 to be the American vice presidential nominee Sarah Palin. Through the relatively simply procedure of putting the head of one person upon the body of another its author has expressed a political opinion that resonated with enough people to ensure a wide distribution. Its undefended status as a fake can be seen as an extension of the author’s opinion albeit unintended.

One hundred and sixty years ago British photographer Roger Fenton made two photographs entitled “The Valley of the Shadow of Death” relating to the siege of Sevastopol during the Crimea War. Each photograph depicted a road between two hills.

American film maker Errol Morris devoted several hundred column inches in the New York Times last year detailing his investigation into the order in which these two photographs were taken. He conclusively proved that the scene with the cannon balls on the road was taken second and by implication it was a set up perpetrated by Fenton. In the age of Photoshop such duplicity would result in instant dismissal, although the second photograph is arguably a more accurate rendering of a bombardment.

What would take several hours of manual labor, transferring cannon balls from the hill side to the road, can today be created in minutes with a computers cut and paste facility. Like the recent pair of Iranian missile photographs. 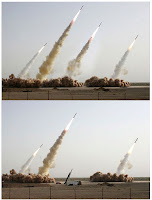 The Photoshopping controversy ensured an arguably longer life than the images merited and overshadowed the story being told. In the current political climate of Israel and the US threatening to bomb Iran, the Iranian ability to retaliate with either three or four missiles is a moot point, that they can retaliate is the story. And that the Iranian missile launchers are mobile reduces the first strike capability to neutralize retaliation. Meanwhile the chatter about the naughty Iranians manipulating their photographs dominates.

This chatter resonates around the documentation of the moment in time captured by the camera is the depiction of a fact and that fact is the truth, the camera doesn’t lie. That this is preposterous is self evident because it ignores the values of those involved in the photographic process from the photographer via the client to the consumer. For all photographs are colored by values ranging from morality, meaning and personal goals to views on life’s larger purpose of the photographer and or their customer.

The October cover of The Atlantic Magazine and its resultant controversy shows what happens when the values of the client and the photographer differ. 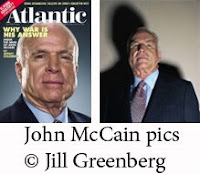 The magazine wanted “a shot that makes the Republican presidential nominee (John McCain) look heroic” and in their wisdom selected the self-professed "hard-core Dem" photographer Jill Greenberg to take the photos. Surprise, surprise the photograph is not very flattering and others from the shoot have been manipulated to show her political stance and reportedly posted on her website.

All the photographs from the shoot are of John McCain (the fact), how he has been portrayed ranging from old man to ghoul are various aspects of the photographers relationship with him (the view). Had The Atlantic hired a Republican photographer and been given a flattering rendering of the nominee it would have been as fictitious as the others. For as long as photographs are made by people the facts will be seen through the prism of their views.

It is unrealistic to expect it to be otherwise. For all photographers not only bring their camera to the shoot but also their views and/or the views of their employer. Whether it is the depiction of an event, the presentation of an opinion or the portrait of a celebrity it is the view the photographer imposes on their work that turns the fact into fiction.
Posted by Henry Bateman