A Carnival of Rides

-
If you ask the average Filipino the distance between 2 places the answer provided will likely relate to the number public transport rides the journey will take. Be it by jeepney, tricycle, train or bus or a combination of them, it is two rides to Lolo Boyboy's house and three to Tita Anna's.

Although taxis abound and are cheap by western standards, for the large majority of Filipinos they are a luxury item. Their use is confined to inclement weather, special occasions and times when the shopping precludes alternative public transport choices. For the adventurous traveler who wants to have a Filipino experience, the public transport system offers a selection of rides which come complete with overtones that could easily have originated in side show alley. 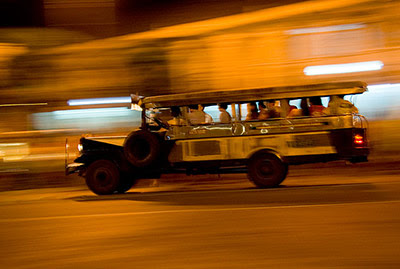 Jeepney at Night
The ubiquitous jeepneys, which can be seen playing tag with each other as they career down major thoroughfares and side streets, the first jeepney gets the passenger, are the backbone of the available rides. Unlike the tourist brochures, the majority are utilitarian in design and decoration showing their World War II American jeep heritage although now being purpose-built.

Jeepney Interior
Privately owned and operated by a driver paying 350 pesos a day for the privilege, they travel a pre-determined route starting and stopping at their passenger's whims along the way. The names of the places of interest they pass are written on each side of the vehicle with a truncated version under the windscreen and the ultimate destination on a sign jiggling behind the glass.
When your destination is part of a jeepney's route attracting the driver's attention is all that is needed to make it stop. For apart from negotiating the traffic, which is often chaotic, collecting fares and making change the driver is constantly scanning the sidewalks for passengers.
Once aboard, after squeezing past the knees of your fellow riders, and planting your derriere upon a vacant bit of bench it is advisable to hold on. For jeepney rides are the real world version of carnival dodgem cars as they vie with other road users for the available gaps in the traffic whilst being ever mindful of their passenger's needs of exit and entry.

Tricycle
Jeepney fares range from eight and a half to ten pesos whereas tricycle fares are a subject of negotiation between driver and passenger. Ranging from fifteen to sixty pesos or whatever the driver thinks they can get. It is the astute passenger who negotiates before the journey. Traveling within or to an adjoining barangay, these 125 cc motor cycles with sidecars attached are a ride that takes the most indirect route between two points.

Tricycles ply their trade
Banned from using major thoroughfares they provide their passengers with an intimate view of the city's back streets. The day to day life that spills out onto these streets can be glimpsed as your ride maneuvers from speed hump to speed hump while you sit concertina like in your metal cocoon. The thrills and implied spills of childhood fair ground rides arise when crossing the major thoroughfares. Truck and jeepney bumpers are at eye level, just inches away, as your ride scampers past.
Gaggles of tricycles can be found in the side streets around markets both super and traditional and at transport hubs like suburban jeepney terminuses and train stations. 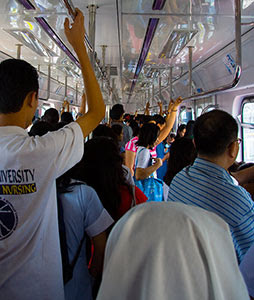 Passengers on LRT 2 train
Transporting millions of people each month the trains in metro Manila as so frequent that time tables are redundant. The majority of the stations on the three commuter rail services, LRT 1 and 2 and MRT are elevated following existing transport corridors. LRT 1 casts shadows along TAFT and Rizal Avenues from Monumento to Pasay where it intersects with MRT which runs, for the most part, above the EDSA to Quezon City. LRT 2 travels overhead along Recto Ave, Magsaysay Blvd and Aurora Blvd interconnecting with MRT at Cubao and LRT 1 at CM Recto. This scenic rail ride is a round trip of about three hours offering passengers a bird's eye view of the city skyline from air conditioned comfort.

A Manila Sunset Viewed from MRT's North Street Station
Meanwhile the earth bound buses that ply the main roads in the city and out into the provinces come in two flavours, air-con and ordinary. Ordinary buses are very ordinary indeed, mostly open to the elements, the window glass having long departed this mortal coil, and more often than not equipped with wooden benches. Air-con buses have upholstered seating, five abreast, refrigerated air from overhead vents, curtains on the windows and an overhead TV down the front. Both types come with a conductor as well as the driver, who when not spruiking for passengers will take your money and issue your ticket to ride. 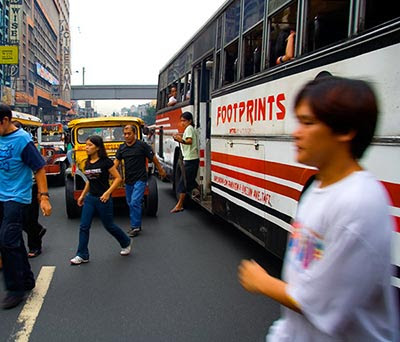 Bus Passengers alight in Taft Ave
The tickets range from multi coloured, admit one fair ground like passes on the ordinary buses to an elaborate arrangement of printed boxes and numbers with punch holes recording all the details of your trip on the air-con provincial operations. The longer haul provincial buses also attract hawkers. Sideshow hucksters offering all manner of snacks, drinks and trinkets for sale before alighting to catch another bus heading from whence they came. 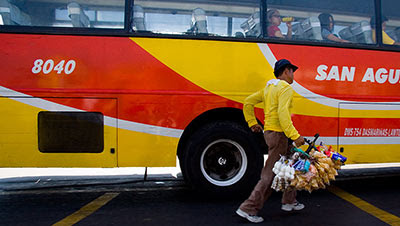 A Hawker Sprints to Catch a Provincial Bus
Whilst enjoying, or not, the various unique aspects of the public transport system, it is wise to remember that all rides are not created equal. The three rides to Tita Anna's, jeepney, train and tricycle, takes 45 minutes, while the two rides to Lolo Boyboy's, jeepney and bus, can take the best part of a day. In the Philippines time is elastic whereas public transport rides are enduring if impetuous.
Posted by Henry Bateman