Writing in the Abstract 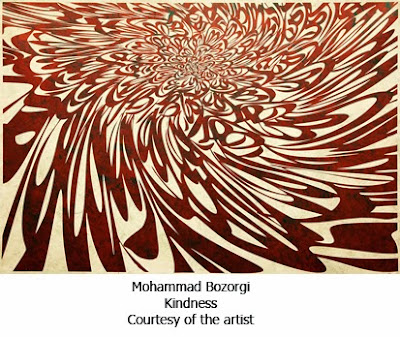 “I have learned from the past and shaped my own artistic practice.”
Mohammad Bozorgi

The Iranian calligraphy artist Mohammad Bozorgi’s ambition is to create his own language. As he states on his website “My desire is to create a new language, one that is based in traditional Persian and Arabic forms but communicates through abstraction.”

About which he elaborates, saying ‘Writing for me is the beauty and grandeur of a noble sense which without doubt refers to my cultural emotions and my intellectual and mental structure of calligraphy and religious faith. Although the public observers of today’s calligraphy do not believe in the historic purity of it; however my attempt whether successful or not is to reach to a certain source of purity.”

Bozorgi started studying traditional calligraphy in his early teens at summer courses in the subject and over the ensuing 15 years he studied 18 classical calligraphy forms of which he mastered 10 and in 2009 was awarded Momtaz (Outstanding/excellent) Degrees from the Calligraphy Association of Iran. Along the way Bozorgi picked up a BA in Biomedical Engineering and a MBA Degree from the Industrial Management Institute of Tehran.

He eventually broke ranks with the traditionalists for being, well, traditionalists, as he says “I stopped my collaboration and training with the Society because I found they were too restrictive and did not allow any innovation to the calligraphic forms with which they were working.”

As he explained to the Project Gallery Cap-Ferrat “After all these classical practices, I started to work with canvases, colours and other materials, I studied graphic and was really keen to try new things, just like now. I have no fear to deform the letters, similar to a child playing with kid’s clay! Unlike many other calligraphers, I prefer to suffuse my canvas from letters, as Jackson Pollock did by colours. I am living with words and letters, they are dynamic in my works and frames cannot restrict their motion.”

Today Bozorgi combines the aesthetics of contemporary painting with the abstraction inherent in the textual base of Islamic art.

As the publicity for his current exhibition states “Combining the illusionistic, multidimensional perspective of Op art with the intricate symmetry and pictorial invention of Islamic manuscripts, Bozorgi creates compositions that appear to palpitate as Arabic and Persian texts are freed from linear orientation. Morphing into fluid forms that float, swarm, or rotate across the canvas, the semiotic meaning of the artist’s calligraphy changes as it seems to go beyond its original realm of spirituality with allusions to material subjects and realities, bringing the sacred domain of devotion closer to perceptual experience.”

Bozorgi’s current exhibition Against the Darkness is on show at Ayyam’s Dubai Gallery until the 25th of August. 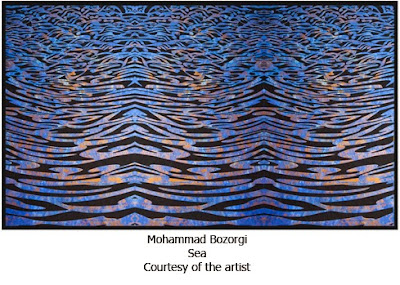