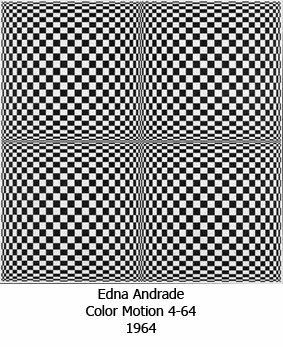 “I didn't really take charge of my career until middle age."
Edna Andrade

Fifteen months before her death in 2008 the 89 year old Philadelphia artist Edna Andrade told The Philadelpia Inquirer’s Amy Rosenberg "Right now, I have not been able to work and I don't have any ideas. I have been busy as a bird dog trying to get rid of my stuff, and trying to get ready to die. I made more money this year than I ever made. I think people are finally catching up with me… I didn't sell a lot of this stuff when I did it. Now people are collecting it."

For the best part of 50 years Andrade lived and worked in Philadelphia as and artist and educator. Anne d'Harnoncourt the director of The Philadelphia Museum of Art described her as "a thoughtful artist whose taste was always interesting, and whose support and encouragement of younger artists was absolutely terrific. I always thought of her not only as a remarkable painter and a wonderful teacher but as a real-life force in the city."

Andrade concurred up a point saying “the city has been very good to me, though many times, especially during the op art decades, I felt like a community of one… I was about the only one doing that in Philadelphia. But I was not ready to move to New York and wait on tables. I would have wound up an old waitress - not an old artist."
And it is her op art works that Andrade is best remembered for. As the Philadelphia Inquirer’s Edward J. Sozanski wrote “Ms. Andrade's approach is distinctive for its gentle, luminous palette and lush, poetic lyricism. One doesn't expect to find such qualities, and even occasional whimsicality, in Euclidean rigor.”
About her work Andrade has said "It's not like showing your emotion. It was very cool art. It's a decision to be totally visual. A story doesn't go with it." And about her 1964 painting Color Motion 4-64 (see above) she added “The scientists, they loved it. They understood some of the geometry of it."
It was after her divorce from her architect husband in 1960 that Andrade’s work began to flourish. As she has said "I think I would not have accomplished as much if I'd stayed married, I was playing second fiddle, doing drafting work.”
Whilst initially being influenced by the Bauhaus in general and Josef Albers in particular, her travels to India and Japan also had a marked effect upon her work with Islamic architecture’s mathematically determined decorative patterns becoming a major point of interest.
As Anne R. Fabbri wrote in her review of Andrade’s 2007 Woodmere Art Museum’s exhibition, “You look at Andrade’s designs, colors and images and feel as if, somehow, the music of the spheres has changed to an upbeat tempo. She introduces you to patterns you never noticed before, finding them in nature, in colors and in all the forms that create our world. You feel as if your eyes have been opened to a new universe.”
Her latest exhibition Edna Andrade: Astrologer's Garden is currently on show at Philadelphia’s Locks Gallery until the 27th of June. 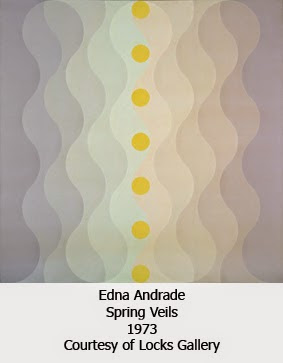