Painting in the City 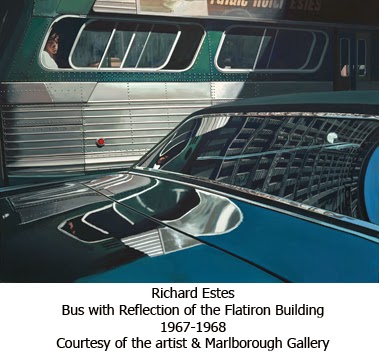 “The abstract quality of reality is far more exciting
than most of the abstract painting that I see.”
Richard Estes

New York City with its acres of glass and concrete is a cornucopia of inherent abstract possibilities for the American photorealist painter Richard Estes. He has been painting the city’s urban landscape since the 1960’s and as he told Artnet’s John Arthur in 1977 “for the past twenty years I've lived in a man-made environment and I've simply painted where I've been.”

For although his paintings depict the city they are constructs in which the artist’s painterly concerns are preeminent. A point that is underscored through his trademark reflections, about which he has said “I don't think I chose reflections as such; I just found them rather rich and exciting--and stimulating to do. It seemed to open up a lot of possibilities for painting.”

And whilst the authenticity of the scene has its place it takes a backseat to the paintings composition. “If I have to choose between authenticity and making a good painting, I'd rather have a good painting. I try to make it as accurate as I can, but I usually have to do otherwise, or it just doesn't look right or feel comfortable,” he says.

Whilst Estes uses a camera as his primary image source, using multiple photos to construct his scenes, it is his love of drawing that inspires his work. As he has said “I love drawing, but as far as I'm concerned the whole painting is a drawing. To me, painting and drawing are the same thing. A painting is a drawing with color; a painting is just a more finished drawing.”

Using a camera as part of his work process was a technique Estes picked up whilst working in advertising after graduating from The School of the Art Institute of Chicago. As he explained “When I was in advertising I spent a lot of time doing layouts and quick sketches with magic markers or chalk…That's when I began using photographs. We had a Polaroid camera and if we needed a figure, or hands wrapping a package or pointing at something, someone in the office would pose. I would use the photographs to make a quick sketch.

Whilst the camera became an integral part of Estes’ process in the making his urban landscapes he was ever mindful of its limitations. As he has said “painting is trickery, because you can make people respond by guiding their eyes around the picture. The photograph doesn't do that because a camera doesn't have ideas. It can only reproduce.”

Over the ensuing years Estes has stayed true to his convictions and created his realistic depictions with their inherent abstraction in the face of the art world’s changing moods. And the mantra that realism in painting had had its day is one he rejected stating “It's not that there wasn't any more left to paint; it was simply that they didn't have the imagination to see that there was a lot.”

His work is currently on show in the exhibition Painterly to Precise: Richard Estes at the Currier at New Hampshire’s Currier Museum of Art until the 15th of June. 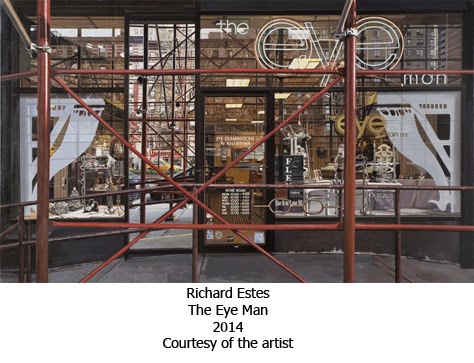