What are they Thinking 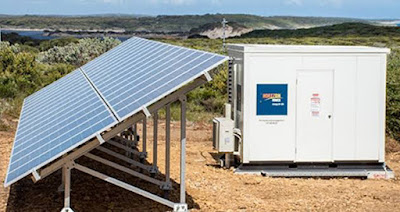 To say that a problem is a challenge wearing a hi-vis vest maybe glib, but it does contain an element of truth. One that our governments, both state and federal, would be well advised to investigate as they contemplate the infrastructure needs arising from our spate of climate fires.

At 19,000 and counting, bushfire damaged and destroyed power poles are starting to litter the affected areas of NSW countryside. About which the state government owned electric power distributor, Essential Energy has said “it was looking at replacing destroyed power poles with composite poles, which could withstand high temperatures, and employ other new technology to improve its network.”

Then there is the reputation these necklaces that stretch from town to town are gaining for the part they play in generating bushfires. As reported by the American Electrical Contractor magazine “During the summer of 2018, the Department (California Department of Forestry and Fire Protection) reported at least 17 more major wildfires that were triggered by power lines.”

In the West examples are emerging of these other new technologies that should become the replacement for the poles and wires that decorate our highways and byways. Utilising solar, batteries and generators, Western Power, the Western Australian State Government owned electrical distribution corporation has started creating micro electrical grids. A 2016 trial of six stand-alone power systems on remote farms in the state’s southwest region has grown to 57 such installations today. And the corporation is currently trialling community sized batteries in a metropolitan setting in Perth’s southern suburb of Mandurah.

Meanwhile further up the coast, 10 hours’ drive from Perth, is Denham, the tourist town and administrative centre for the Shire of Shark Bay. Horizon Power, the State Governments regional electrical power enterprise, is installing a 500w solar farm to power a hydrogen electrolyser to back up the four wind turbines that currently supply 60% of the town’s electricity.  It is hoped that this micro power grid will replace the town’s old diesel generators and supply all the town’s electrical needs.

And in the last six years over three million solar-battery storage systems, that have had a positive effect on 16 million people, have been installed in rural Bangladesh. A pioneer in the micro finance movement, micro solar systems are a natural fit. And the combination of these two systems has seen the creation of nano and micro grids. Utilising peer-2-peer networks Bangladeshis trade electricity, each according to their needs.

With these baby steps in the First world and toddling ones in the Third, one cannot help but wonder what our Federal Government is thinking. Encouraging investment in coal assets will see them become at best stranded, as feared by the ANZ bank amongst others, or at worst a major contributor in our impending suicide. And the high temperature resistant composite power poles are just a continuation of the short sighted, business as usual mindset that saw firefighting experts ignored by the Federal Government.

One can only hope that NSW will in its turn ignore their big brother and embrace the adoption of the small-scale other technology that improves its network rather than more of the same poles and wires technology fed by fossil fuel behemoths.