What a Difference a War Makes

“The most important thing for me is to be honest with my paintings.”

As part of its entry strategy into the Damascus art market in 2007 the Ayyam Gallery conducted an open call for emerging Syrian artists to join an in house program that included representation. From the 150 entries ten were selected and amongst that ten was the figurative painter Mohannad Orabi.

An alumni of Damascus’ Faculty of Fine Arts from the class of the year 2000, Orabi was painting stylized characters that he had determined were self-portraits.

As he told the Canvas Supplement “Sometimes she turns out to be feminine, sometimes masculine, sometimes childlike. They don’t look like me physically, sure, but their mood is mine.”

The birth of his daughter in 2011 coincided with the start of the Syrian civil war, events that were the catalyst for a major shift in his painting as well as his life.

As he told Dubai’s English language newspaper, The National “It was the year that everything changed. Suddenly we were surrounded by a lot of violence and blood. We felt ­sadness, stress, fear, disappointment and confusion. We were really worried about the future and no longer felt safe in the present. When I looked at my daughter and heard the sound of war outside, the characters in my paintings were not my story ­anymore but those of the people around me.”

Orabi moved to Cairo and two years later to Dubai where he has a residence permit. “The situation was so bad in Syria I couldn’t stay any longer. It was so dangerous. And all I want to do is raise my child in a good, safe environment.”
Displaced from his homeland, Orabi relies on social media to keep in contact with family and friends with the images in his work becoming symbolic of their profile pictures.

As he explains “I began to build up a relationship between myself and the profile pictures of other people on Facebook. It wasn’t the real person but their image that showed me how they were feeling.”

A point Orabi elaborates about saying “I haven’t always made political art and maybe in the future I can paint about being happy. But right now, all my passions are towards Syria simply because I’ve been directly affected by what has happened there. It’s irrelevant to think about anything else – commenting on this terrible situation is what I should be doing. People glance at headlines and don’t take them in. But maybe if they see an image and it really ­affects them ...”

Orabi’s current exhibition Mu'allaqat is on show at the Ayyam Gallery in Beirut until the 16th of July. 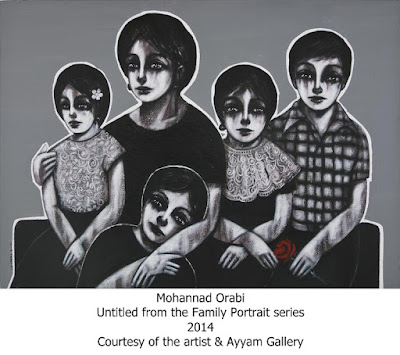