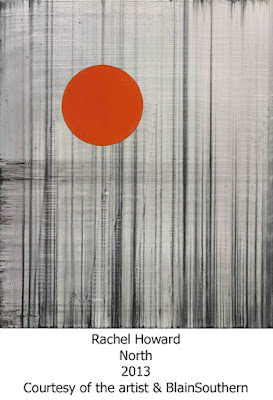 “I do want people to feel something”
Rachel Howard

In the world of contemporary art the gods are ephemeral with the deity’s omnipotence being measured by the prices they can command at auction. And it is a world that the British artist Rachel Howard has experienced first-hand.

After graduating from London's Goldsmiths College in 1992 Howard became an assistant to the soon to be demi-god Damien Hirst who had graduated a couple of years earlier. As his first assistant in 1993 Howard painted the spots of the now famous series which in June of 2013 London’s Independent newspaper reported to be at “1,365 and counting.”

Howard’s spots are said to be amongst the best in the series. As Hirst told the Independent “The best spot painting you can have by me is one painted by Rachel." It is an opinion with which the outspoken public intellectual Germaine Greer concurs.

Six years later Howard had her first solo exhibition in 1999 at London’s A22 Gallery with paintings made with house paint which she allows to separate enabling her to use the pigment and the varnish separately within the same work.

Although abstract in their presentation Howard’s works are conceptually underpinned by her relationship with religion. Her best received works to date, the Sin paintings from the early years of this century, the Suicide paintings first exhibited in 2007 to her first commission "Repetition is Truth - Via Dolorosa" harken back to her teenage years spent at a Quaker school for their inspiration.

Now a confirmed atheist, although reported to sing hymns in the bath, Howard’s Quaker education raised questions such as “If god made me, then who made God?” which informed those works, although her current work has moved on to examine the emotional content of a more secular nature.

As she told The Guardian Newspaper’s Mark Brown “The work is supposed to be – very unfashionably – emotional. I don’t care. All this work is about me really, it is about what goes on in my head and making sense of everything.”

Howard has also moved on from using house paint to the artist’s traditional medium; oil paint.

As she told Studio International “With this new body of work [it’s] now an exploration of oil paint and the gentle shift that occurs [from] abstraction to figuration and back again, a sway, a shimmy, and a dance between the two.”

A not un-similar duality has also effected Howard’s recognition as an artist. Like in 2008 when she sold a painting for $65,000 at an auction in New York. A couple of months later another painting she had made sold for $1.3 million. The difference between the two was the second work had her 1993 employer’s signature attached.

Since then Howard has had several solo exhibitions in England and Europe with the latest being Rachel Howard at Sea which is currently on show at Hastings’ Jerwood Gallery until the 4th of October. 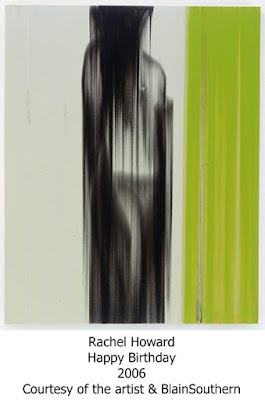