Down the Rabbit Hole - An Exhibition Review 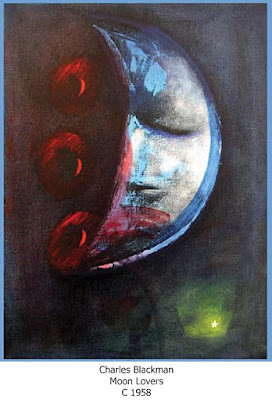 Authors note: Whilst I write about artists and their work I refrain from from expressing a personal opinion (a critique if you will) about work that I have not seen in person. Consequently I write about an artist's life and experiences that have informed their work preferably, whenever possible, using their own words. I do include third party critiques of their work that confirm a limited opinion of the work gleaned from the internet. For I am keenly aware that what appears on the internet can be very different from its appearance in the real world.

Last night I had the opportunity to attend the opening of BLACKMAN + BROMLEY - Down the Rabbit Hole.

Charles Blackman is one of the undisputed masters of Australian art. Working in the middle to later years of the last century he rightly shares a name recognition comparable to his contemporaries Sydney Nolan and Arthur Boyd.

Down the Rabbit Hole is presented as a homage to Blackman and as such consists of an original Blackman painting along with 38 recent drawings and 14 reproductions of earler paintings, 11 acrylic works by David Bromley and sculptures, prints, embroideries, cut outs and a studio book  all by the recently formed Blackman Studio. As such it is a mixture that ranges from the sublime to saccharin.

The lone original Blackman painting, Moon Lovers, is a joy to behold. Painted circa 1958, when Blackman was at the height of his game, it is a work that could almost be a poster child for the Blackman oeuvre. As my companion remarked "looked at from the left it is dark and mysterious, from the right the light of the moon prevails." And in the bottom right corner is a voyeuristic star in a bucket of its own light.

Facing this master work is a suite of recent drawings. In 1994 Blackman suffered a stroke and these drawings from 2006 to 2012 reflect its debilitating effects. No longer able to paint these preparatory like pen and ink and mixed media on paper sketches allude to works that will not see the light of day.

The reproductions of selected Blackman paintings whilst being archival pigment prints on artist paper are by necessity framed under glass. Apart from the inherent distraction of refelctions one cannot help but surmise that they will end their days in second hand stores being purchased by art students for the frames.

The Blackman Studio came into being in April of this year. Set up by the children from Blackman's second marriage, daughter Bertie and son Felix, the studio works in close co-operation with Blackman Foundation to "celebrate and produce new artifact collections that reframe, respect and propagate the extraordinary legacy of Charles Blackman."

Amongst the merchandise on offer, it is the sculptures that come closest to the Blackman vision. With Alice in a Boat which by defying its author's anonymity, or pehaps because of it, enables the bronze to capture the spirit of the originals.

David Bromley along with his wife Yuge are "creative advisors" to the Blackman Studio and as such a selection of Bromley paintings made especially for the exhibition are included. The majority combine images from Bromley's oeuvre with selections from Blackman's all painted in Bromely's sympathetic caricature style.

And then there are the four works in the Homage to Blackman - Red Heart series. Here black silhouettes of cute urchins cavort across red love hearts in saccharin cliches; an antithesis to the magical haunting surrealism of Charles Blackman.

Promoted as "Charles Blackman’s art reinterpreted for the evolving modern day art and interiors landscape," Down the Rabbit Hole continues at Claremont's Gullotti Galleries until the 21st of August. 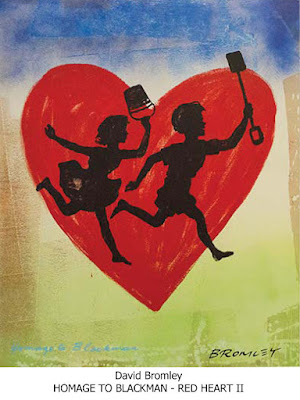