Paris, the one in France, life models, yep the one’s who pose in the buff for artists, took to the streets in their work clothes to protest a ban on tips. 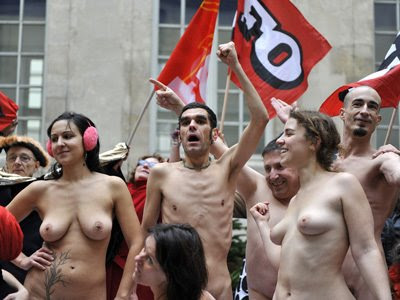 Life classes at the city’s beaux arts schools have banned the passing round of le cornet – a rolled up cone of paper which is employed at the end of the class to enable participants to show their appreciation for the model in cold hard cash. The classes are organized by the city which makes the models public servants and under French law it is illegal to tip public servants.

After braving the elements in the all together they put their clothes back on to talk with the city’s deputy mayor, Christophe Girard. Who gave them a sympathetic hearing, having in his youth plied their trade.