For the last 4 years artist Fred Siwak from Ipswich in the USA has been sending his art around the world in an attempt to have it photographed in every country. Fred suffers from Lou Gehrig's disease, which affects the nerve cells in the brain and spinal cord, leading to muscle weakness and atrophy. He is confined to a wheel chair and as he says, has “progressed” to 24-hour breathing equipment and 24-hour personal care.

During the early stages of his disease he used his computer to create lino cut prints which he emailed to people he found on the internet who would photograph his work in their country and email him the result. He has over 2000 photos of his work from 189 countries with the latest being from the Philippines. 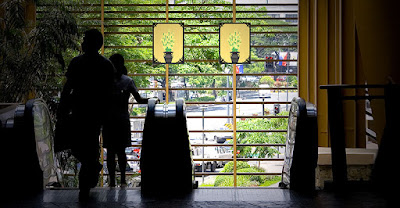 Fred's work hangs above the escalators
leading from Makati Ave up to the shopping area
of The Greenbelt in down town Makati.
The project recognizes 194 countries world wide with those missing from Fred’s travels being Angola, Burundi, Central African Republic, Republic of the Congo and Suriname.

If you are in one of those countries and would like to help this courageous guy achieve his goal get in touch with him at http://members.virtualtourist.com/m/8b6ad/ and become a part of World Art for ALS Awareness.
Posted by Henry Bateman