David Franck is an American photographer who has been traveling the byways of his country capturing the street signs of a bygone era. 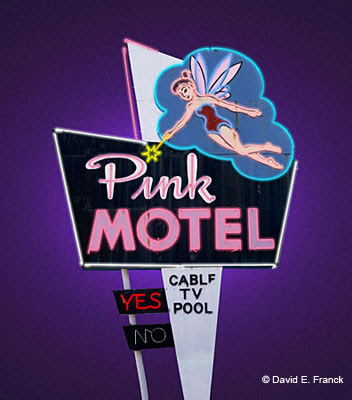 His images are from an on-going series of road trips documenting America's disappearing commercial landscape from the mid 20th century. They capture a time when free enterprise was more innocent and the 'American Dream' was fully alive. Mom and pop motels, restaurants and liquor stores peppered the old highways and byways, before major interstates were built bypassing small town America.

A selection of David's images can been in his guest gallery 'Another Roadside Attraction' at www.pissedpoetpics.com just click on the link and then follow the links to his gallery.
Posted by Henry Bateman

i've never been to america but the vanishing traces of a bygone era is sad to me all the same. thanks for sharing the link :)

As a history buff I appreciate that someone is gathering a collection of images like these. Here in Toronto a lot of the old signs have given way to modern monstrosities.