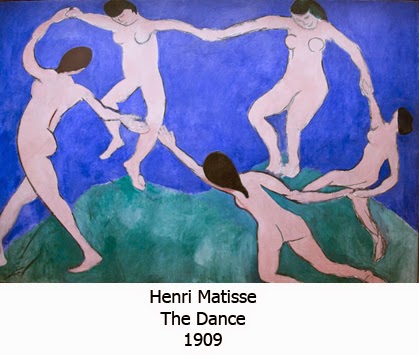 Henri Matisse’s The Dance, of which there are three versions, are all considered 20th Century masterpieces.  The British artist David Hockney has paid tribute to two of the three Matisse works with a series of paintings depicting a similar motif.

Matisse’s 1909 version is loosely sketched with pale colors and minimal detail and is considered a preparatory sketch for the 1910 work. It is a joyful work that encourages the spectator to come join the dance. The left hand side of this work also forms the background for Matisse’s 1912 painting Nasturtiums with the Painting "Dance" I.

The 1910 version with its classic Fauvist color palette reflects Matisse’s fascination with primitive art; it has been described as a fleeting victory of life over death. It is often associated with Igor Stravinsky's The Rite of Spring, an orchestral work commissioned for Sergei Diaghilev's Ballets Russes. 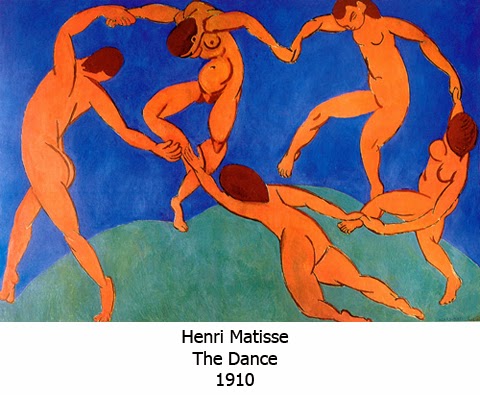 Interestingly the 1909 version of The Dance and Nasturtiums with the Painting "Dance" I are part of the New York’s Museum of Modern Art and The Metropolitan Museum of Art respectively. The 1910 version The Dance lives at St Petersburg’s Hermitage Museum.

The 1932 version of The Dance shows that Matisse had moved on. Dance II is a large triptych mural commissioned by Albert C. Barnes for his Philadelphia Barnes Foundation. Aspects such as flatness, simplicity and color had become the artist’s preoccupations over the intervening years. In the making of Dance II Matisse experimented with cut-outs which were to become a major fascination for the rest of his career. 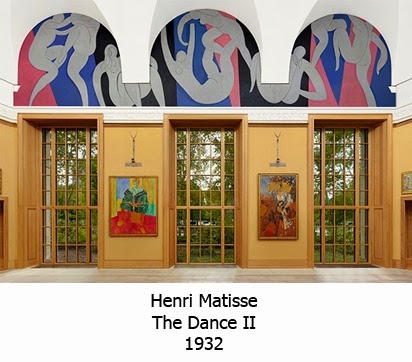 David Hockney’s Dance series return to the earlier Matisse works for their inspiration. Hockney employed professional dancers as his models whose various attitudes he captured for his five figures. His dancers form a closed loop that excludes the spectator and the more detailed and busier backgrounds seem to allude to his conflict about whether to make the UK or the USA his home. Hockney’s works are on show until the 10th of January at Pace’s 508 West 25th Street gallery in New York.
Posted by Henry Bateman