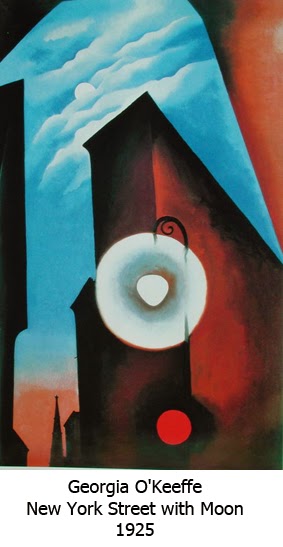 Growing up on a dairy farm in Wisconsin, Georgia O’Keeffe developed a love of solitude. Her discovery of the American south west in general and the New Mexico desert in particular in her 20’s combined  to make these traits the hallmark of this icon of American art.

At the time when her work was first being shown in New York, O’Keeffe was living in the small west Texas town of Canyon. About which she wrote to her friend and later biographer Anita Pollitzer “I am loving the plains more than ever it seems—and the SKY—Anita, you’ve never seen SKY—it is wonderful.”

She moved to New York at the insistence of photographer and modern art impresario Alfred Stieglitz who became her lover, husband and a lifelong promoter of her work. Stieglitz set up in a studio where she painted her flower masterpieces and her New York series.  About the New York series O’Keeffe said "One can't paint New York as it is, but rather as it is felt."

Gail Levin, the Distinguished Professor of Art History at the City University of New York, wrote about O’Keeffe’s New York paintings “Her skyscraper paintings, with their sense of crowding, airlessness and oppression, suggest the displaced nature-lover who grew up in the mid-western countryside. O'Keeffe is as always fascinated by the moon and the sun, as befits a girl who grew up under the broad skies of the Wisconsin prairie.”

After a decade in New York, O’Keeffe started visiting New Mexico on an annual basis. She had become the most famous and highly paid woman artist in the world when Stieglitz abandoned her for another protégé, 18 years her junior. This combined with her failure to complete a Radio Music Hall mural caused a nervous breakdown.

O’Keeffe recuperated in New Mexico seeking solace in the solitude of the desert and her art. This became permanent in 1940 when she purchased the Ghost Ranch house at Rancho de los Burros, the first of her two New Mexico properties.

Except for a three year period after her husband’s death in 1946, to sort out his estate, O’Keeffe shuffled between her houses painting the “O’Keeffe Country” until her own death in 1986. 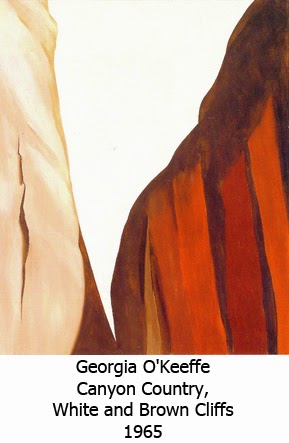