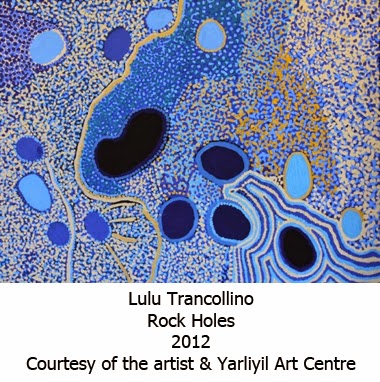 With no written language Aboriginal art forms a major part of the cultural heritage that defines what it is to be an Australian aborigine. Based on a history known as The Dreaming this art tells stories handed down from generation to generation for over 50,000 years.

Just 43 years ago the fragile bark paintings and the ephemeral sand drawings were brought in the 20th Century to become one of its most exciting contemporary art forms. Sydney teacher Geoffrey Bardon was working in the Australian outback when he introduced modern art materials to the Papunya men to assist in their story telling.

Since then Australian Aboriginal Art has been exhibited worldwide and absorbed into museum collections both large and small. Likewise the artists have embraced the new medium expanding their palettes from earth colors to the full gamut of colors available in the acrylic spectrum. Like in the image above by  Lulu Trancollino which for her and her kin is a map of three flood water marked rock holes  at Bedford Downs Station, for non Aborigines is a striking abstract with a predominately blue palette.

A couple of days ago The Art Gallery of Western Australia launched a new stand alone website to record and share the visual art of Aboriginal artists from Western Australia’s Kimberley region. Known for its mining and pastoral industries, the Kimberly is home to some of Australia’s finest rock art and has one of the most vibrant community’s of contemporary artists working today.

With 11 Art Centers and over 100 artists listed http://desertriversea.com.au/ should be a first stop for those with an interest in the art from the region. But herein lies the problem, the art is buried deep within the bowels of the website. The initial impetus for building the site and the major attraction for visitors is almost an afterthought.

This link http://desertriversea.com.au/art will take you to the art, but buyers beware. The site loads 12 images of reasonable size thumbnails initially. Each click of the “Load More” button adds another twelve until you are many pages deep into the site. Should you choose to investigate a thumbnail for more information and then return to the list you will be sent back to the first page to start again.

It is a navigation system designed to discourage exploration. This is a shame for there are some exquisite works of art to be found buried in this treasure trove. 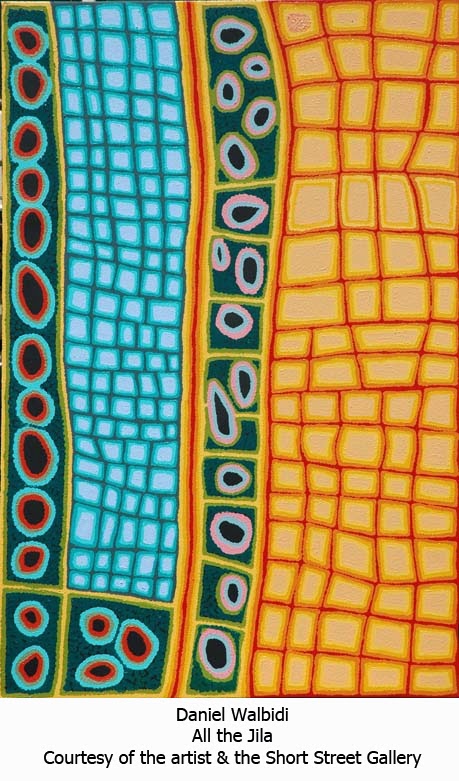