Unable to Ignore the Political 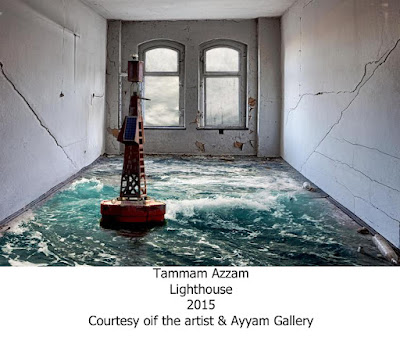 “People call me a Syrian artist, but I prefer to be considered as an artist.”
Tammam Azzam

In 2011 the Syrian born mixed media artist Tammam Azzam was forced to abandon his home in Damascus and relocate to Dubai by the civil war that embroiled the country.

As he told Toute La Culture’s Melissa Chemam “After seven months into the Syrian revolution, my wife and I felt it had become impossible to continue living there. Most artists were struggling and I have a young daughter that I could not put to school. The gallery that I work with moved to Dubai and they asked me to come with them. I decided to move, after consulting my wife.”

It was in Dubai that the University of Damascus trained painter embraced digital media as his main form of artistic expression.

About which Azzam says “I [had] become familiar with graphic programming, especially since 2002, but the first time I used it as an art media was in Dubai. I had left my studio behind me and I felt like so much was missing. In another city I had to start another story. At first, there were so many difficulties just to find a home for my family and a school for Selma, my daughter, and I needed to find work. I concerted my work in graphic design and settled a mini studio at home. That’s how I started working with digital media.”

Azzam’s 2013 lightbox work Freedom Graffiti (see below) from his Museum Series, works that superimposed European masterpieces on the destroyed streets of Syria, went viral on social media. “The scene comes from a picture of Douma, a small city near Damascus, one of the cities where the revolution started, and which has been destroyed completely since,” he states.

Rejecting the label of political artist, Azzam identifies with the people overwhelmed by events over which they have no control; the frustrations of the “Everyman”.

As he has said “I’m an artist who came out of this political background. I’m not producing posters against a dictator or a regime, but artworks about people, which is the main purpose for me.”

Azzam’s current exhibition The Road, which highlights his return to painting, is on show at Ayyam’s Dubai gallery until the 3rd of March. 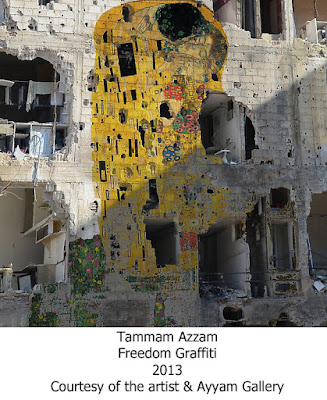