And The Subject Is

“The subject of drawing is drawing itself," said the 2010 Dobell Prize for Drawing judge, Sydney artist Alun Leach-Jones, in his comments about Suzanne Archer’s winning work Derangement. He elaborated about his decision saying “Suzanne Archer’s winning work clearly shows her awareness of this profound aspect of the art of drawing – regardless of its apparent subject matter.” 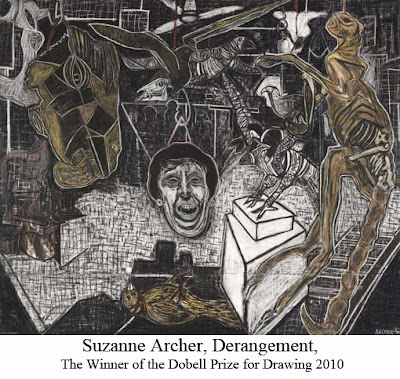 Archer’s charcoal, ink and chalk pastel work, which the judge described as “expressive, darkly poetic and full of drama”, is a self portrait in which she is surrounded by the paraphernalia of her studio. A dehydrated kangaroo, a horse’s head sculpture along with a dead bird, snake skins, skulls, shells and various kinds of road kill, that have either been donated or found in nearby bush land, decorate the artist’s working space. "People say my studio's a little bit like a museum," she told The Australian newspaper.

Her interest in dead animals stemmed from a series of drawings she made in 2002 at Sydney University’s veterinary laboratories. About her subject matter Archer told the Sydney Morning Herald ''Often they're quite contorted and they're much more interesting poses than a live animal.” The 65 year old artist also said "Because I'm a mature-age artist, there is some concern with what the afterlife is about. I suppose because I've worked a lot with those animals that are actually dead, there is a link to thinking about life and death."

The Dobell Prize for Drawing is Australia’s most prestigious award for drawing, with a purse of $25,000 for the winning artist. The acquisitive award was initiated by the Trustees of the Sir William Dobell Art Foundation in 1993 and is administered by the Art Gallery of New South Wales.

Derangement along with the 45 finalists selected from 635 entries is on show at The Art Gallery of New South Wales until January 30 next year. More information is available at the Gallery’s website, here.

Email ThisBlogThis!Share to TwitterShare to FacebookShare to Pinterest
Labels: In The News

A very good article. I am looking for is information. Thank you very much for the great article .We are encouraged to write this great article came out agai