The independent charity, The Art Fund has joined forces with the Staffordshire County Council, Lichfield District Council and Tamworth Borough Council to raise the £3.3 million necessary to keep the recently found Staffordshire Hoard in the West Midlands. The Birmingham Museum & Art Gallery and The Potteries Museum and Art Gallery, Stoke-on-Trent have just under four months to raise the seven figure valuation set by the Treasure Valuation Committee for the Hoard. 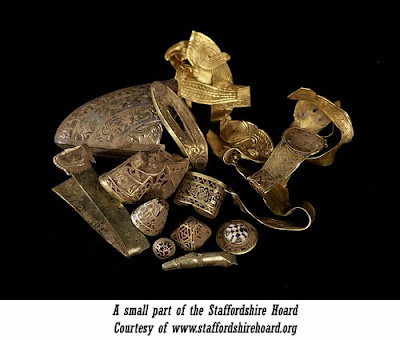 Found in July by metal detectorist, Terry Herbert on a farm owned by Fred Johnson the Staffordshire Hoard is the largest and most valuable treasure find in British history. And should the valuation not be met the ownership of the treasure will revert to the finders for them do with as they see fit.

The Art Fund is an independent charity with some 80,000 members committed to saving art for everyone to enjoy. Since 1903 they have assisted more than 600 museums and galleries around the UK to save over 860,000 works of art, from priceless masterpieces which were under threat of being sold abroad, to acquiring fascinating works costing a few hundred pounds. Each year they provide about £4 million to museums and galleries to help them build the public collections of the future. They also led the 2001 successful campaign to extend free admission to all national museums and galleries.

Andrew Macdonald, Acting Director of The Art Fund, said: "This awe-inspiring hoard really must be kept in the West Midlands where it was unearthed. Since we were founded in 1903, The Art Fund has led many successful campaigns to save treasures such as this, and our success is down to the support of members of the public who care as much as we do about preserving the nation's heritage."

The public can donate to save the Staffordshire Hoard at www.artfund.org/hoard and more information about the Hoard itself can be found here.
Posted by Henry Bateman