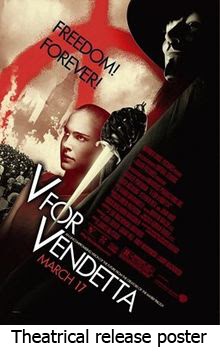 Remember, remember, the Fifth of November,
The Gunpowder, Treason and Plot.
I know of no reason why the Gunpowder Treason
Should ever be forgot.

If you haven’t seen the movie V for Vendetta it is 132 minutes of time well spent.

A futuristic tale that unfolds in an that has become a fascist state. The main character, known only as V, is a masked freedom fighter who uses terrorist tactics and a wonderfully verbose vocabulary to fight the oppressive society. It’s Batman with a brain. It also has a script to die for, with many quotable lines.

“Gentlemen, I want this terrorist found... and I want him to understand what terror really means.”

“My father was a writer. You would've liked him. He used to say that artists use lies to tell the truth, while politicians use them to cover the truth up.”

“I'm not questioning your powers of observation, I'm merely remarking upon the paradox of asking a masked man who he is.”

“But again, truth be told, if you're looking for the guilty you need only look into a mirror.”

“Verily, this vichyssoise of verbiage veers most verbose, so let me simply add that it's my very good honor to meet you and you may call me V.”
Posted by Henry Bateman

Email ThisBlogThis!Share to TwitterShare to FacebookShare to Pinterest
Labels: Movies