Last night I watched ‘The Island’ which turned out to be a much better movie than I anticipated. The concept of the film, medical clones leading meaningless lives whilst waiting for their owners’ need for body parts was a credible starting point. And, whilst the action sequences were spectacular and innovative they did, as is usual with this film genre, stretch the suspension of disbelief to the max. On more than one occasion, I found myself saying “yeah right, as if,” as our hero and heroine escaped, unscathed, from yet another cliff hanger or in this particular case, sign hanger. 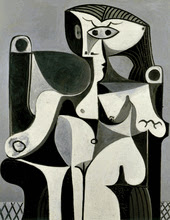 What I did find of major interest in The Island was the on-going reference to Picasso’s Femme Assise (Jacqueline). Painted in 1962, it was hanging on the wall of the head bad guy’s office in 2050 and featured in numerous shots. Being a major fan of the master it was, for me, the movies saving grace as it slipped into its predictable story line.
Painted in shades of grey it did give the badies’ motives a greater depth especially during the chief henchman’s Road to Damascus scene. Drawing one back to the underlying premise of the film after the roller coaster ride of thrills and spills.
But not enough, I am afraid, to drag The Island out of a ‘B’ classification. My best beloved says I expect too much from the movies, and I suspect she may be right. But in the words of another immortal, the venerable TS Eliot, “I grow old, I grow old, I shall wear the bottom of my trousers rolled.”
Posted by Henry Bateman