Why There are so Many

Yesterday was Lola Rosa's funeral. She had been teetering on the edge for a couple of months and finally succumbed a week ago. After lying in state whilst friends and relatives paid their respects for the week she was off to her final resting place.

The hearse followed by a stream of mourners on foot headed to the Parish Church of St Peter and Paul just off P Borgos St. There a mass was held for her departed soul and a communion for the faithful although your humble scribe was a tad disappointed that there was no lamb. 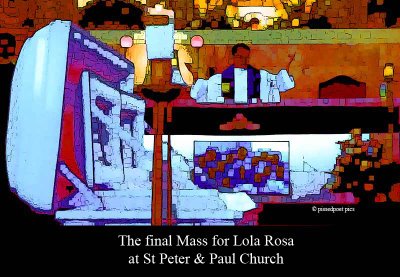 After the ceremony the hearse followed by its ambulatory throng headed off on its 2 mile trek to the South Manila Cemetery. Once there Lola Rosa’s coffin was placed in her waiting tomb which was sealed and the attending mourners then decamped back to the Zenaida Street compound for sustenance and discussion of the days events.

It is not an uncommon event in the Philippines to attend a funeral. In the short time I have been here, a little over a year, this was my third, which brings to a total of eight I have attended in my 50 odd years of shuffling about on this mortal coil. They being the mother of one of the best beloved’s friends and a distant cousin on the best beloved mother’s side of the family.

It is a well documented fact and one that I can attest to through personal experience that after a funeral significant others are drawn closer to each other with an intimacy that is more intense than at other times. With this in mind and taking into account the size of Filipino families and the frequency of funerals it is little wonder that the Philippine’s population is growing at an exorbitant rate. Especially in the light of the dominate arbiter of social values only answer to birth control being abstinence.
Posted by Henry Bateman