A Weekend in the Country

When we left the sealed roads and hit the dirt our journey became a roller coaster ride in slow motion. Our party of 9 had left Manila in a Toyota Hi Ace, which fortunately was equipped with air con, some 3 hours earlier. We headed down the Southern Luzon Expressway hung a right onto the Calabarzon Expressway to Lipa City then through to Padre Garcia, a left at Rosario and then a right at the San Juan Municipal Hall to the dirt road heading for the Barangay of Laiya Aplaya in deepest Batangas.

Louie Almarez was the leader of our troop and it was to his home province that we were headed, for some weekend relaxation, his cousin’s wedding and a game of basketball. He has a house in the neighbouring Barangay of Calubcub II which is well off the beaten track. An idyllic rural retreat nestled in rolling hills surrounded by coconut palms, banana and bamboo trees, and farm lots carved out of the tropical rainforest.

We arrived at his aunt’s house in Laiya Aplaya just before midday and Filipino hospitality kicked in with a brunch of local seafood and rice for the travelers amidst the preparations for the nuptials the following day. The afternoon was spent at the Kabayan Beach Resort frolicking in a warm tropical sea, snoozing whilst a gentle breeze kept the heat at bay, shots of brandy with sprite chasers, karaoke and merienda of spicy chips and ube pastries. 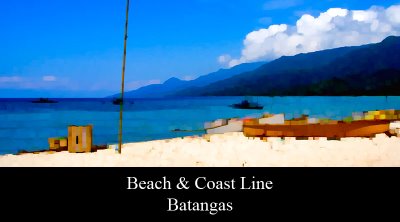 Upon our return to the 50 odd houses, a dozen or so Sari Sari stores, the half dozen dirt roads, church, basket ball court and 3 tricycles of Laiya Aplaya we caught the slaughter and butchery of the pig that was to be breakfast on the morrow. After a dinner of rice and seafood at a second aunt’s house we headed off to Louie’s house to watch the sun set through the fronds of the rain forest and sip gin with sprite chasers. The bamboo bed was not as hard to sleep on as first impressions would have had one believe.

The sun streamed through a cathedral of green as the morning mist slowly dissipated and the hamlet of Calubcub II came to life. Hot sweet coffee fired up the neurons before the chill of the hand pumped water from the deep well cleared any remnants of sloth from proceeding night. Although it was Sunday there was business at hand for the locals as caribou pulled carts and plows to fields to earn their keep. 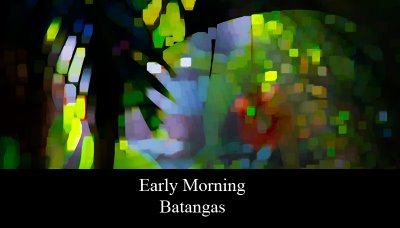 After the completion of our morning ablutions we headed off to the wedding breakfast of Louie’s cousin, Helen with her new husband Limuel. The porker that drew the short straw the day before was presented to guests in a mouth watering array of dishes amidst a continual barrage of announcements of best wishes for the happy couple and the generosity of their relatives and friends. Around mid morning the festivities were starting to wind down and the serious business of the trip was at hand.

The most common feature of all the barangay’s in this part of Batangas province be they of 10 or 50 houses is a church and a basketball court, more often than not with them sitting cheek by jowl. It should also be stated that when it comes to basketball, Louie will more than likely dribble off this mortal coil. That 2 others of our party were team mates in Manila it was little wonder that we adjourned the 100 meters to the local basketball court after the breakfast festivities. With 2 locals to make up the numbers and a purse of 150 pesos the visitors did battle with the locals under the late morning tropical sun.

The victorious visitors with their entourage in tow rolled out of town to spend a couple of hours on the water in a friend’s bangka before returning to the rain forest hide away for a late lunch and a relaxed afternoon of not doing very much. After merienda we once again loaded ourselves aboard the Hi Ace and bid adieu to roller coaster roads and headed back to where the rubber hits the asphalt.
Posted by Henry Bateman

Email ThisBlogThis!Share to TwitterShare to FacebookShare to Pinterest
Labels: Out of Town

Oh, weekend at the beach...eating and drinking. I'm so envious!

Sounds like you had a good, relaxing weekend Henry.

oh, thank you for this blog!ive got fond memories of Laiya and Batanggas (ive got lots of relatives in Tanuan. i still remember serene Laiya back then. undeveloped (or underdeveloped) yet superbly beautiful ;) ah those were the days.

I've been to a couple of weddings in the country. They are very nice affairs, very warm and convivial, filled with family and friends. The one thing I don't like about it, though, is the food. One can only take in so much pork dishes, though one would have to admire the versatility of Filipino cooking.