Of Hammers, Pots and Kettles

The political elites that oppose the President, Gloria Arroyo, are once again sharpening their knives and orchestrating a second attempt at impeachment. Again a very blunt instrument is being used for political purposes.

Expecting a partisan house of elected representatives to produce a verdict that is anything other than one which serves their own interests is like expecting the snake and the mongoose to become bosom buddies. Matters of fact are best left to an independent judiciary where the evidence for and against can be weighed without the necessity of pandering to the whims, both real and imagined, of an electorate.

Three of the four issues included in this current impeachment process fall into that category, the legality of executive order 464 and proclamation 1017, the President’s responsibility for the killing, arrests and detention of political dissenters, and whether illegal contracts were entered into. The seriousness of these issues surely requires they should be determined on facts rather than political grandstanding and emotion.

But if all you have is a hammer, then everything looks like a nail. Although one can’t help but speculate that these issues could raise the political temperature enough to precipitate a re-run of January 2001. When the then President, Joseph Estrada, escaped impeachment only to ousted by People Power II and be replaced by the current President.

The fourth issue of electoral fraud including the use of public funds for Arroyo’s campaign is the most appropriate for consideration by politicians. This issue stems from the highly publicized distribution of PhilHealth cards just prior to the election and the placement of elected officials mug shots on infrastructure construction billboards. Well, every serving politician in all the democracies I can think of is guilty of this one in one form or another.

My favourite is from the last election in Australia. The government of the day gave, for each child under 16 years of age whose parent was a welfare recipient a $1000 tax free gift. Not once, but twice, first in July, then again in September prior to an election in October. I wonder whose vote they were chasing?

It is one of the perks of being in office, reminding your electorate of your largess and the benefits you were able to bring to them through your hard work in the corridors of power. Something of value must be offered to even be considered as potentially worthy of a vote. Hence the popularity of the pork barrel much beloved by both Congress and the Senate.

Should these august chambers find the President guilty on this charge it would surely be a case of the pot calling the kettle black. 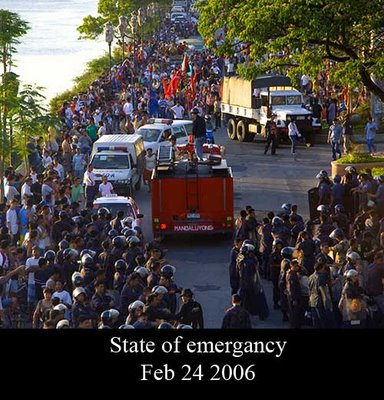 It is a common saying that there are no losers in the Philippine political arena, just victors and those who got cheated out of their victory. I am not much of a political observer myself, but I just wonder if the people who want Arroyo's blood have thought of what would happen if she does step down and if they really just thrive on chaos.