It seems to be a generally held opinion that the traffic in Manila is at best chaotic and at worst mayhem on wheels. This is not only voiced by visitors and expats but also the locals although with the latter group there seems to be a certain pride tingeing the assertion.

With some 20 million people trying to get from A to B on streets of which the majority were built before the invention of the horseless carriage, it is to be expected there will be a level of congestion. But my ponderings whilst biding my time as a jeepney passenger in yet another traffic snarl have brought another variable into the equation.

I guess I should admit that I am no longer a driver and since my driver’s license expired a few months back and I felt no compunction to renew it, it is a lifestyle I shall maintain for the foreseeable future. Being a street photographer, zipping around in a tin can at 60 kilometers an hour meant I was missing far too many photographic opportunities. The fact that my car had died and would require an injection of 2 grand, that I didn’t have, made the decision to employ shank’s pony and the public transport system a lot easier. Once I recovered from the withdrawal symptoms it turned out to be quite a smart move, I got a lot of otherwise missed photos and the savings funded 3 overseas trips. 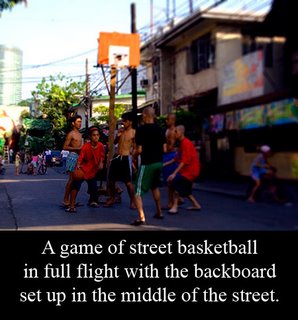 Now that the walking habit is fully ingrained and as I make my round the streets of Manila one of the most notable observations is the Filipino’s affinity with their streets. From the time they can walk the street is an extension of their home, a play ground, a meeting place with friends, an ever changing vista to watch and contemplate in quiet times. Games of pool and basketball, practicing skate board jumps or just hanging out, the street outside the front door is where it happens.

Very little attention is paid to the vehicular traffic on these side streets that The Filipinos call home. When a vehicle comes along it will announce its arrival with toot on its horn. Then the residents will temporarily stop their activity, let the car or truck pass and then resume where they left off.

Now take this ingrained attitude of “it is my street” and put it behind the wheel of a motor vehicle and it is little wonder that there is a blatant disregard for other users. The only other city I have experienced with similar traffic is New York and there I am led to believe there is a similar affinity with the streets, especially in the inner city neighbourhoods.

From my experience of inner city living in Australian cities where in the majority of cases the residents tend to live their lives off the streets and there the traffic seems to be somewhat more orderly. There is no empirical evidence to support this contention, it is just my observation and speculation, for what it is worth.
Posted by Henry Bateman

I lived in Angeles City in the late 80's and drove a huge boat of a car - a Cutlass, to be exact.

One day, a friend and I decided we would DRIVE downtown or rather I would drive downtown (I had AC and trikes might be fun but it was HOT that day) well for some reason, she suggested I take a different route, and she told me to turn left, down a narrow side street and within about 20 yards found myself face to face with a street market. I could not turn anywhere, I could not back up because a huge crowd of people had surrounded the car.

I had no real choice except to try and go forward.

The people were kind and simply picked up their wares and backed up as I passed, very very slowly. As I passed, they would go back to their spot and resume their sales.

That is not behavior you'd see in the good old USA, is it?

Denise, nor in OZ. That encapsulates why I live here.

Great site loved it alot, will come back and visit again.
»

Thanks, your always welcome.