Television stations in the Philippines must be awash with hand held microphones. Never have I seen so many. Every presenter seems to have one along with performers and guests. I have the lingering memory of seeing the 6 presenters of a local free to air breakfast show seated on 2 sofas each with their own hand held mic. Thankfully they were radio mics otherwise the studio floor would have been spaghetti junction.

The majority of local programs are presented in Taglish, a mixture of Tagalog and English. The majority is Tagalog and my command of Tagalog is such that to get the full meaning of the dialogue would require a lot more than the odd English being word thrown in. Still it is fun to watch the antics of the family’s favourite show, Eat Bulaga which translates as peek-a-boo. 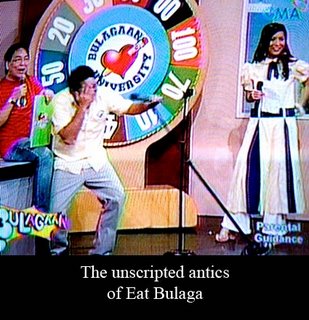 If longevity is any determining factor in popularity, Eat Bulaga has to be stellar. It has been going to air for 25 years, presenting 6 shows a week, 52 weeks a year. It is essentially a 2 game shows where contestants can win up to 1 million pesos and indeed some do, played either side of a half hour comic relief segment.

The comic relief segment is a show to behold in itself. Set in a quasi school room it is based on knock, knock jokes, parodies of pop songs, a chocolate wheel with a jail waiting for those who score zero and usually ends with custard pie fight.

Its main competition in the game show stakes is Wowowee which goes to air on a rival station after Eat Bulaga has finished. Its producers are currently being investigated after 74 people were crushed to death and over 300 injured when a crowd 30,000 people surged forward for tickets for their first anniversary show at the 10,000 seat PhilSports Arena in Pasig.

Fortunately for this Tagalog challenged Aussie there is also cable to compliment the free to air stations. All the usual suspects, HBO, ABC Asia, Discovery, Hallmark, Nickelodeon, et al are amongst the 60 channels on offer for 500 pesos a month.
Posted by Henry Bateman

I seriously need a daily dose of TV programming in English here in Switzerland. I'm pretty sure I can't get a special cable connection for only PHP500.00.