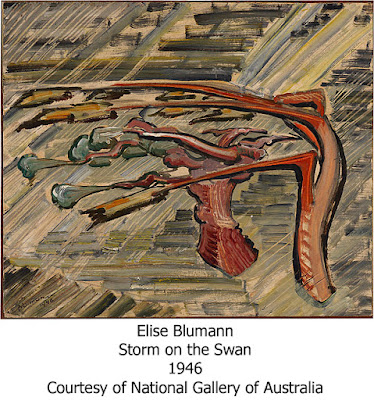 “Deep down in all good painting there is abstract work.”
Elise Blumann

When the lyrical expressionist painter Elise Blumann arrived in the Western Australian capital of Perth in 1938 it was a conservative art scene that confronted the artist heavily influenced by the European modernists in general and the post-impressionists in particular.

As the Art Gallery of Western Australia described the art scene in the early decades of the twentieth century “It was a difficult time for artists in general since patrons were few, exhibition space was virtually non-existent and interest in the arts in was minimal…whilst Modernism swept the rest of the world, Perth held strongly to its two dominant influences, the Arts and Crafts Movement and the romantic landscape tradition.”

For the German born 41 year old, who with her husband and three sons had spent the proceeding four years escaping the Nazification of her home land the West Australian landscape with its exotic flora and harsh light was a good fit for an artist steeped in the work of Van Gogh, Cezanne, Matisse and the early Picasso’s.

Fourteen years after her arrival Blumann held her first exhibition in her new home land, one that proved to be provocative to many. As The Australian Newspaper’s Kitty Hauser wrote “In 1944, she exhibited her work in Perth under the pseudonym Elise Burleigh. If the Anglicized name was meant to deflect criticism, it didn’t work. Her frank nudes were deemed titter-worthy if not scandalous in the local press. Her landscapes perplexed the ­critics. Letters to the press insinuated alien ideas were corrupting a healthy culture.”

A second exhibition in 1946 found little more acceptance of her work. About which the critic Charles Hamilton noted that she had “begun to abstract from our landscape its essential meaning’: the banksia, the melaleuca, the blackboy and the zamia were `survivals from the past’; her portrayal of desert Aborigines symbolized `primitive man facing the encroaching forces of an alien civilization.”
Disillusioned with the possibilities for her art in Western Australia Blumann spent the 1950’s and 60’s travelling between Europe and Australia holding only one exhibition of her work in Paris in 1950.

Twenty six year after her Paris exhibition Blumann received official recognition of her work with the Western Australian Art Gallery and the National Gallery of Australia finally adding some of her works to their collections. Public recognition was even slower in coming and it was not until a retrospective exhibition at the Western Australian Art gallery in 1984 that it was forthcoming.

As the University of Western Australia’s Dr Sally Quinn told the Australian Broadcasting Corporation in Perth “She [Blumann] came with fresh eyes, looking at the beauty and what was unique about the place and expressing that in paint in a very dynamic way, that wasn't done by other modern artists in Perth until much later."

The exhibition Elise Blumann: An Emigre Artist in Western Australia is currently on show at Perth’s Lawrence Wilson Art Gallery until the 19th of September. 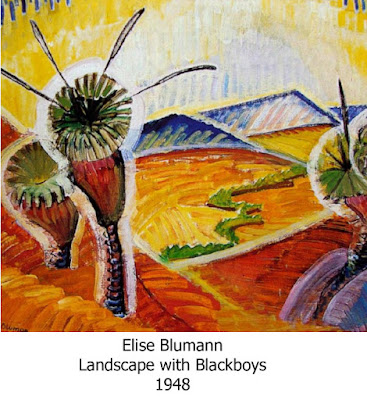