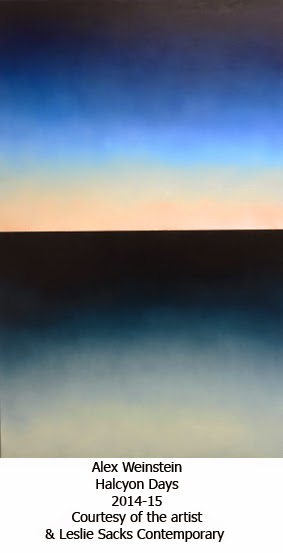 “The search for a perfect wave is not unlike


the struggle to make a perfect work of art.”

In his Morton Fine Art’s review of Australian artist William Mackinnon’s The Speed of Light exhibition the California based artist Alex Weinstein concluded “And as all surfers know, once you are out there anything, anything at all, can happen.” For Mackinnon’s journeys in paint, not surprising for landscapes of an island nation, often have the ocean as their final destination. And for painter/sculptor Weinstein the ocean is his subject matter, not as an observer but as an inhabitant.

With a double major from Brown University in Fine Art and Creative Writing (Hons), writing about art is a good fit for Weinstein. As he told the Southbay Magazine “The walls around what defines art have lowered exponentially for me through the years. So while I might not like a piece of art, I can accept and appreciate its value.”

But as good a fit as writing maybe, the lure of paint and salt water was greater with the latter taking precedence, for if longevity has any say in the matter, Weinstein is a surfer who paints. He was 12 when he started riding the waves of the coast of Rhode Island whilst his rendering of cows in the countryside came over a decade later.

A year in New York’s editorial world was enough and the chance to remodel his parents’ newly acquired house in France’s coastal region of Brittany was accepted with alacrity. As he wrote in The Surfer’s Journal “That parlayed into opening a gallery in Pont Aven called Swell. I stopped worrying about the editorial component of art making - it wasn’t going to be about other people’s words or ideas; it was going to be, like, straight-up learning how to paint…So that’s what I did. I painted the landscape, and I opened the gallery.”

It was through the gallery the Weinstein met fellow surfer and artist David Lloyd who convinced him to try the Southern Californian lifestyle. It was a move that Weinstein found cathartic in more ways than one. As he told the Brown Alumni Magazine "No matter how good my accent became, or how well people knew me, I was always 'The American.' In Venice [California], you could walk outside with your clothes on fire and nobody would notice."

Weinstein also met the Pacific Ocean for the first time and as he has written “Coming from the Atlantic, I’d never seen an ocean that was that volatile and “on” all the time. Where I came from the sea goes totally dormant for days on end. Soon after, I started the first series of paintings called “Westward.” They were all loose abstractions, but with a palette that keyed into the colors I was seeing daily; greens, blues and nocturnal tones.”

Since then the sea and the sky have become Weinstein’s dominant subject matter for both his sculptures and his paintings; all informed from the vantage point of a surfboard.

Weinstein’s current exhibition Westward Paintings is on show at Santa Monica’s Leslie Sacks Contemporary from the 25th of April until the 6th of June.