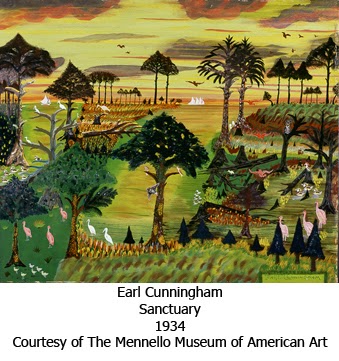 "Every one of my paintings are brothers and sisters.
I can't separate my family of paintings."
Earl Cunningham

Eleven years after his death, the America self described “primitive artist” Earl Cunningham was described in a 1988 lecture by the then director of the Museum of American Folk Art, Robert Bishop, as a "truly great painter [whose work is] not in many ways unlike that of [Henri] Rousseau from France." A remark that no doubt would have delighted Cunningham, whose long held ambition, was to have a museum dedicated to his art, although he started painting from a pecuniary necessity.

At the age of 13 Cunningham started to make his own way in the world as a tinker and peddler to which he added paintings of boats and landscapes in later teenage years which he sold for 50 cents. After obtaining a license as a river and coastal pilot Cunningham traveled the Eastern seaboard of the United States from Maine to Florida. During the Second World War Cunningham raised chickens for the US Army and afterwards opened his gallery and curiosity shop "The Over Fork Gallery" in St Augstine Florida.

Amongst the bric-a-brac and antiques Cunningham displayed his paintings along with a prominent sign stating "These paintings are not for sale."

About which the art historian Robert Hobbs states in his monograph Earl Cunningham: Painting an American Eden, “In works filled with a sense of fantasy about the past as well as a subtle and disarmingly charming critique of the present, Cunningham presents a new symbolic genesis of America. His paintings re-create the past to give a halcyon view of what America could have been and might still be.”

Hobbs further argues that whilst being self taught, Cunningham was a painter who embodied the ideals of modern art first articulated by the 19th Century French poet Stephane Mallarme. Mallarme asserted that poems are made of words not ideas. A concept, that inspired the Cubists, the Futurists, the Dadaists and Surrealists amongst others in their quest to have colors and shapes define their work; an environment they could control.

Hobbs wrote “For Cunningham, symmetry was a system for transforming his unique experience into a universal equation…Patterns order his dreams with identifiable and repeated elements that help to establish rhythmic harmonies throughout a given work…While this sense of order partially stems from Cunningham's seafaring days, when every object aboard ship had to be accounted for and given a place, his continuance of it in his art and in his antique shop indicates a desire to maintain control over his environment.”

A selection of Cunningham’s work is on permanent display at Orlando’s Mennello Museum of American Art. 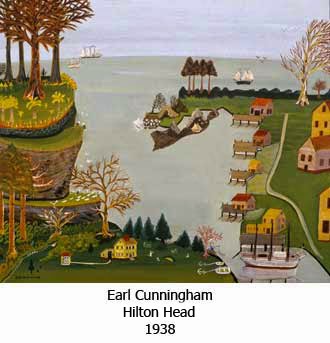