You Want Fries With That 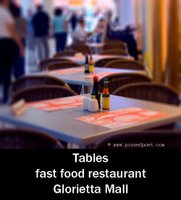 With “kain na”, which literally means let’s eat, being a traditional greeting, it is little wonder that fast food outlets are so popular in the Philippines. To say they are everywhere is an under statement. Wherever you turn around when out and about, the opportunity to gobble and go will be at your elbow.

The one man ihaw-ihaw on the street corner fanning the coals under his barbecued banana or chicken neck bits on a skewer. The hole in the wall carinderia with 3 or 4 stools set at the counter offering local dishes with rice on the side for 30 (AU$0.79) pesos. The mobile sellers on their bicycles or pushing their hand carts offering everything from fish balls to ice cream. The pizza parlours with a dozen home delivery motor bikes parked out the front.

The branded factory franchised fast food outlets, the bakeries and the cake shops. The food halls you must be traverse between the check outs and the front door of your local supermarket. The department store food halls, like SM Makati whose basement food hall has so many outlets that it takes a good 20 minutes just to survey them all. 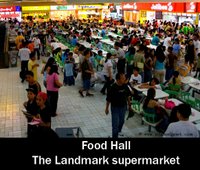 The acres of the malls dedicated to food outlets. Even the very up market Greenbelt in Ayala and Rockwell’s Power Plant Mall with their vast range of restaurants and coffee shops finds space to accommodate the major fast food brands along with some others.

Pre-eminent is Jollibee, the local fast food franchise who has taken on the majors at their own game and beaten them hands down. It seems that even the big kid in this play ground, MacDonald’s, known locally as Mc Do, is running a poor second to the happy insect. With its subsidiaries of Greenwich Pizza, Delifrance and Chow King, where the food actually has some taste, it is the undisputed leader in the Philippine fast food industry.

At the corner of JP Rizal and Reposo Streets, two hops, a step and a jump from the house in essentially suburban Poblacion there is a bank, a petrol station, a Jollibee, a Chow King and next door to the bank a Mc Do. The Jollibee and the Mc Do are both 2 story affairs. Next door to Jollibee are 3 carinderias and across Reposo Street, outside Chow King, are a couple of ihaw-ihaws. The question is not only what to eat, but where? 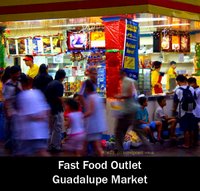 For the wary traveler, not wishing to experience the Philippine version of Bali Belly, which actually comes from the water rather than the food, or so I am led to believe. The water here in Manila and in Cebu, from my experience, is drinkable out of the tap; well it hasn’t got me yet. I have been living here for the best part of 6 months and had 3 months of visiting prior to becoming a resident and not once has my stomach been upset.

During that time I have eaten from all the sorts of food providers available. The precautions I take are not to eat from low trafficked eateries, in a busy joint there is less time for the food to sit and wait. The second is to eat the food at the temperature it is when served. It is my understanding that poorly reheated food is the ideal harbour for the nasties that like to attack your gut. Here, more often than not, food is served tepid, a piping hot meal is a rarity. It makes sense, hot food, hot climate equals perspiration. Demanding that the food be heated up is just asking for trouble.

I tend to avoid ihaw-ihaws mainly due to the fact that they are open to the air on the street and that black stuff coming out of the back of the jeepneys has got to settle some where.

If you do follow my advice and do get a severe case of the runs, you have my sympathy but it is only offered as what works for me. There is a wonderful diversity of taste sensations in Filipino cuisine and although KFC with rice has a novelty value it is still KFC. I would much prefer Andoks manok, chicken grilled over glowing charcoal served with brown, spicy gravy that is to die for.
Posted by Henry Bateman

I love KFC and I love Andoks! Hope to buy Andoks chicken when I revisit Manila this year. The "lechon manok" sauce is marvelous!

I'm not sure about that part about water in RP being drinkable from the tap. I would suggest that tourists buy bottled water instead. You know, just to be on the safe side.

I went through that whole trip on my first visit. Then I forgot about 3 days in when cleaning my teeth and drank the water. Went though an agonizing 24 hours waiting for the dreaded lurgy to hit. It didnt and I havent worried about it ever since. As I said this is my experience, nothing imperical about it, it just works for me.
Anyhow thanks for your comments, all points of view are welcome, I dont have a monopoly on the truth.

I knew you were writing from experience. I just wanted to give some (unsolicited) suggestion to would-be tourists planning a trip to the Philippines.

To be honest, I drank tap water too (a lot actually) when I traveled around the Philippines in the '90s. Like you, I didn't get sick as well. But some of my traveling companions insisted on buying mineral water since their stomachs were not as 'strong' as mine.