The Streets are for People

The Philippine version of a military coup is People Power. When a million plus Filipinos congregate on the EDSA in Manila and thousands of their fellow citizens on other streets throughout the country to display their displeasure with the ruling elite People Power is in full swing.

These world attention grabbing headlines are only the tip of the iceberg of the Filipinos affinity with their streets. Vehicular access to the streets is often restricted if not completely obstructed as the Filipino’s every day life spills out onto the street.

Be it for a religious fiesta of which there are many. The first was last Sunday for the Feast of the Holy Family. Agata St in San Andreas was decorated and closed for the day. Games of palo sebo, climbing a greasy pole for the goodies at the top, and pabitin, goodies attached to a wooden frame which is slowly lowered as a score or more of kids jump to reach them, were arranged for the kids. Fifty five year old Kuya Resty is convinced that the poles are shorter and the goodies reduced than in his day, but that is another story. Later in the evening a group of strolling players entertained the residents with fire eating and dance displays. 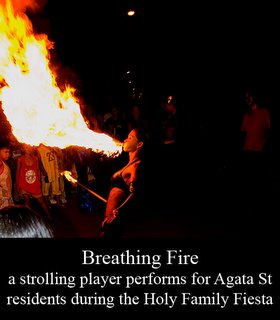 Our street is closed for three weeks at Easter. Known in the Philippines as Holy Week, a chapel is built in the street. For the two weeks prior to Holy Week, whilst it is being built and decorated, and for the week itself our street becomes a dead end for motorists. A score of other streets where chapels are built also restrict the horseless carriage’s dominance. 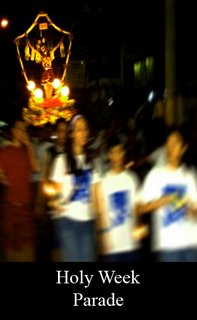 On the Wednesday and Friday evenings a host more streets become the preserve of pedestrians only as the holy week parades wend their way through the barangay. With the Friday night procession taking the best part of two hours to pass any given point.

During October our street, where two way traffic is the norm, is reduced to a one way lane. October is the month of the Holy Rosary and the grotto to the Virgin Mary located next door to our compound comes into its own. A tent that takes up half the width of the street is erected and each evening around 6pm plastic chairs are set up for the devotions of the faithful.

The tent is donated by the mayor of Makati City; well that’s what the sign on the side says. To the best of my knowledge no permits or licenses are sought or granted for any of these activities. They just happen, as do the numerous secular street parties.

When ever the size of the crowd for a birthday, an engagement, a funeral, a party or any sort of celebration, looks like exceeding the capacity of the house it is held in the street. A tent is erected; tables and chairs are put in place and more often than not a videoke machine is set up centre stage. At parties in the Philippines the expectation is to sing rather than dance.

Like the street sellers discussed in Retail therapy III these are essentially illegal assemblages to which officialdom turns a blind eye. It would be the brave official who attempted to move these people along and would no doubt require back up of military proportions to be successful.

The streets of the Philippines are owned by the people. They express their ownership in these many and varied ways on a daily basis and when truly aroused by blatant injustice they will use their streets to change the course of their history.
Posted by Henry Bateman