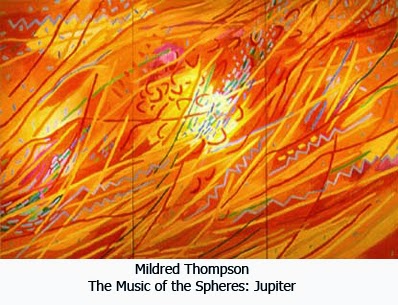 Six years before her death the African American artist Mildred Thompson told the Times Union/Jacksonville.com "I don't really consider anyplace home, I am truly a citizen of the world.”

From 1958 to 1986, except for a couple of years in New York and three years shared between Florida and Washington DC, Thompson lived and worked in Europe, predominately in Germany and Paris. The discrimination against her race and gender was her motivating force, especially that encountered during her two years in New York.

As she says in her papers held by the Emory University “I sometimes feel that my relationship with this country [America] is like that of an old lover–‘on again, off again’… never ever being able to completely break with, hoping with each renewal that perhaps, this time, ‘we are going to make it–this time it will work.’”

After failing to obtain a Fulbright Scholarship at the end of her formal American training as a painter Thompson self funded her attendance at Hamburg’s Art Academy where she received a Reemtsma Stipendium at the end of her first year of study.

After three years Thompson returned to New York and whilst both the Museum of Modern Art and the Brooklyn Museum brought her work the New York galleries were uninterested. She has said that one gallery owner told her “that it would be better if I had a white friend to take my work around, someone to pass as Mildred Thompson.”

Disillusioned she returned to Europe and came under the sway of the German Expressionists in general and Wassily Kandinsky in particular. Thompson’s study of physics along with her interest in music from jazz to Bach became major influences in her work. As she told the Lubbock Avalanche-Journal’s Amber Irlbeck, “The subject matter is taken from physics -- radiation and magnetic fields. Planets make sounds. It's random noise if you listen to it in that way, but if you listen to it in different way, there are beautiful sounds -- cosmic winds like lullabies being sung."

A painter, printmaker, sculptor and musician, Thompson eventually settled in Atlanta in her 50’s where she, apart from exhibiting regularly both in America and Germany, taught art and art history at several colleges including the Atlanta College of Art. Thompson was also an associate editor for influential periodical Art Papers and a singer/guitarist for the Wedo Blues band.

The New York Times said in a 2005 review of her work "Ms. Thompson's paintings are made of brilliant color patches, which are almost pointillist in her 1990 canvas ''Magnetic Fields'' and less tightly woven in ''Atmospherics'' (2002). Her rhythmic marks lead the eye on a merry dance around the composition and suggest the manifestation of unseen forces for which she has found visual equivalents."

The exhibition Creating Matter: The Prints of Mildred Thompson is currently on show at Emory University’s Michael C Carlos Museum until the 17th May. 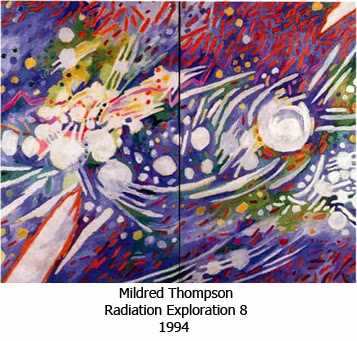