Blend In to Speak Volumes 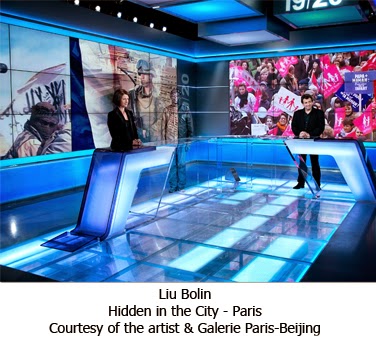 “When I am standing still, I am not only making art
—that is the appearance—
I am actually struggling against my destiny.”
Liu Bolin

From the rattlesnake in the Arizona desert to the ever so humble green tree frog camouflage is a tactic employed in the animal kingdom to avoid becoming and assist in finding lunch. In our increasingly surveillance orientated world merging in with the background may well become an indispensable tactic for humanity to adopt. Although when this ability is put on display it can become a powerful public awareness raising tool as Chinese artist Liu Bolin has discovered.

Widely known as the Invisible Man, Bolin uses sculpture, performance, body painting and photography to create images where he disappears into the background of his chosen environment. Or as Bolin prefers to say “My intention was not to disappear in the environment but instead to let the environment take possession of me.”

What started as a lone public protest when the Chinese authorities reduced his studio to rubble has grown to comment about food safety, land seizures, and damage to the ecosystem amongst other issues. As he told The Standard last year, “Nine years ago, the government seized the land of the art district where I worked. My studio was torn down. To protest against the government, I created a camouflage artwork. I expressed my dissent and questions about land seizure by making myself invisible. At this time, I simply used my work as an outlet for anger. After I gradually calmed down, I was able to reflect upon contemporary Chinese society, and I tried to use this format to remind people about these problems around us.”

Since then Bolin has taken his show on the road creating works in Venice and New York. Venice was chosen because of its significance in Western art and its vulnerability to rising sea levels and New York for the potential conflict between humanity and its life style.

Of particular concern for Bolin is consumerism. As he says “My works are not a variation of American pop art that praises light and colors. I express my questions and suspicions. For example, the food we consume is not safe: in my work “Supermarket,” I communicate my concerns with my audience. We really have no idea about which bottle of water is safe to drink and I can’t find one bottle of water that I will drink without being concerned.”

Since then other cities have been added to Bolin's itinerary and while audiences practice their “Where’s Wally” skills, for at times Bolin is well hidden, they unconsciously consume the concerns inherent in his chosen locations. And by standing still Bolin has captured the world’s attention with his works protecting his freedom of speech.

His current exhibition of photographs, sculptures & installations, Liu Bolin: Recent Works is on show at Paris’ Galerie Paris-Beijing until 2nd of May. 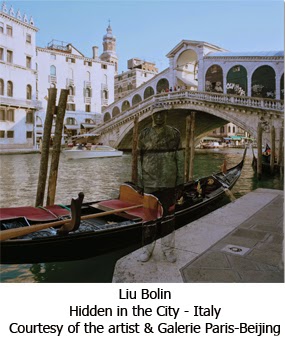