Kalbaryo – A Shrine to Celebrate Easter 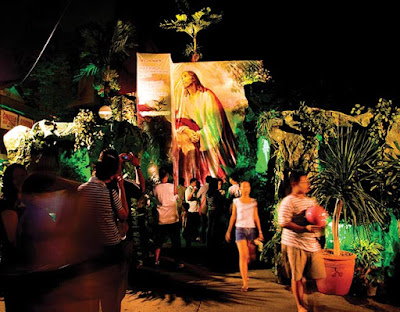 The Philippines is the third largest Roman Catholic country in the world with some 80% of the 85 million Filipinos following the faith. Although religion and the state are constitutionally separate, the Church has a significant influence on both the affairs of state and the affairs of the average citizen. But this is a two way street with a heterogeneous fusion of indigenous elements into the main stream of Catholicism resulting in a folk Christianity unique to the Philippines.

The major events in the Christian calendar, Christmas, Easter, All Saints Day, are all celebrated with gusto with Easter or Holy Week, as it known in the Philippines, being the one that ignites the Filipino passion. From the public self-flagellation and crucifixions of Pampanga Province through to the street parades and the Easter Shrines of Makati City’s Poblacion barangay with their infusion of popular and/or indigenous cultural influences, Holy Week is the celebration of the calendar. 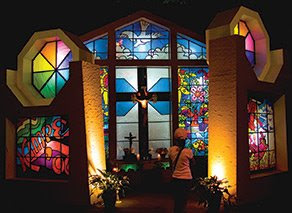 For over half a century, the 17000 residents of the Poblacion barangay have held street parades, a Saturday night vigil or salubong and constructed shrines known as kalbaryos in honour of Holy week. Each year up to 40 of these shrines are dotted about the one square kilometer that is this inner city suburb. Some are existing chapels, given a spring clean and a coat of paint, but the majority are new constructions with many blocking vehicle access to streets of the suburb.

Throughout the year, street groups known as Samahan raise the up to 50,000 pesos required to employ an artist, feed and water the volunteer assistants and obtain the materials necessary to actualize the artist’s vision for their Kalbaryo. Although sacred in inspiration, the designs are often secular ranging from the American Wild West to the pharaohs of Egypt for their chosen themes. 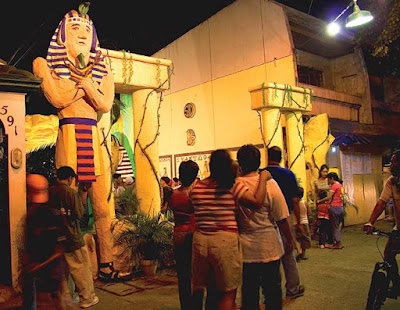 These Kalbaryos are folk art of the first order. Utilizing a range of materials from the time honoured papier-mâché to polystyrene, the 20th Century’s set builder’s material of choice. Along with the tradition building materials of bamboo, ply wood and timber through to bricks and mortar that call on the trade skills of the residents which when combined with the artist’s skill with the brush produce settings worthy of an off Broadway production.

Into these artistic expressions are placed tableaux of life size mannequins, dressed in fine raiments, depicting scenes from Jesus’ last days on earth. The Samahan also construct floats to carry their tableaux in the evening street parades that are an integral part of the Holy Week celebrations. More often than not, these floats, which are carried or pulled along the parade route by the people power of the Samahan members, carry their own power supplies to illuminate the scenes depicted.

In the weeks leading up to Holy Week, streets become impassable to vehicles as the construction takes place. Scaffolding is erected, frames are built and clad, sculptures several meters high are constructed, water features are incorporated, lights are installed as the chosen street corners become bee hives of activity. When Holy Monday, the start of Holy Week, arrives the activity goes up a notch, the Kalbaryos must be completed by Wednesday evening.

For its arrival heralds the first street parade which wends it way through the barangay incorporating every Kalbaryo in its route. The devout carry crucifixes for installation in the shrines and a selection of the tableaux make the journey accompanied by the Makati Marching band. It is now that Christ’s Pasyon, the marathon chanting or singing of the poem of Jesus' life, passion and death, which is recited round the clock, begins and continues through to Good Friday at each of the shrines. 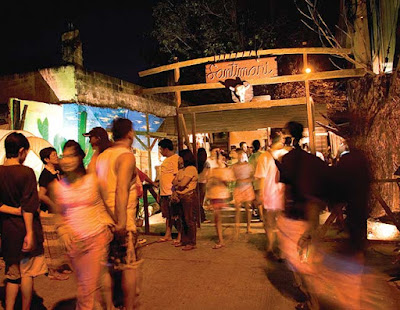 Maundy Thursday sees thousands of people from all over Metro Manila descend upon the Poblacion barangay. They wander the streets admiring the diversity of the art on display. There is carnival atmosphere in the air as excited children run and point, adults ooh and ah, street sellers hawk their wares and camera flashes bounce off the walls of the Kalbaryos. As evening descends, the throng of spectators’ increases until streets like A. Mabini, which has 5 Kalbaryos scattered along its length, becomes a sea of people happily mingling together and jostling each other as they view the artistic endeavors of the Poblacion residents.

On the evening of Good Friday the big parade of the week, the procession of the Blessed Sacrament, winds it way through the streets of the barangay. Replete with marching bands, hundreds of people carrying candles, the black draped, bare footed mourning women who silently pass two by two along with all the shrine’s tableaux on their floats. This procession takes a good hour and a half to pass any given point. Meanwhile the crucifixes in the Kalbaryos have been draped with a black shroud which will remain in place throughout Easter Saturday.

After Saturday’s midnight mass, at the parish church of Saint Peter and Paul, effigies of Jesus and Mary are carried along different streets to meet for the Salubong outside the Poblacion Sports complex. There, a temporary stage has been erected upon which a choir of children dressed as angels await their arrival. The statue of Mary has her head shrouded with a black cloth and before a crowd of several thousand people packed into this impromptu town square it is removed when she meets her son. Blue and white helium filled balloons bare her shroud into the dark heavens above.

Eight to ten hours after this two a.m. meeting, many of the Kalbaryos are builder’s rubble. They have had their 4 days in the sun and over the following few days any trace of their existence will have vanished. Except perhaps for a painted section of road way and memories recorded on cell phones and tourist cameras. 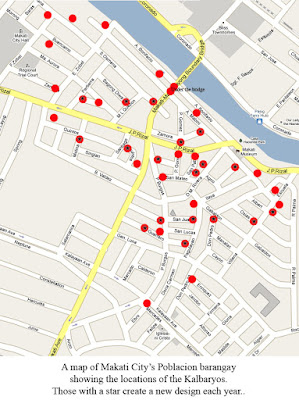