One of the joys of living in a 50 plus year old house is the opportunity to do some serious DIY projects. Over the weekend another power point gave up the ghost and a check of some of the wiring indicated that time had taken its toll. Never one to give up the chance for some serious play, it was determined that major surgery was required.

My best beloved was a tad concerned about the size of the undertaking but agreed that it was necessary. So bright and early Monday morning, the power was disconnected and a temporary power supply to drive assorted implements of destruction connected.

Fortunately, the style of construction of the house meant that the wiring was in wooden conduits attached to ceiling beams, these just had to go. By 9am they had gone. The light fittings were relatively new having been replaced in the last few years but the switches often made buzzing noises and the power outlets grip on plugs was of the very limp wrist variety.

The trip to the hardware store was where things got interesting. The first shop was just around the corner and I had been there for odds and ends over the past months. But this particular Monday morning, the guy I usually dealt with was off and his mom and uncle were at the helm. His mom is the cashier and conduit, junction boxes, terminal strips and the like are not her forte. The uncle’s command of English is less than my command of Tagalog, which is konti lang (not much). Their best advice was to try Divisoria. 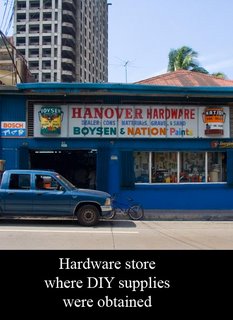 As I walked out of the store empty handed, nagging doubts of biting off more than I could chew settled upon my shoulders. I did recall another hardware store about a hundred meters up the road that had interesting toys in the window and was a lot closer than the 2 rides to Divisoria.

With the assistance of pantomime, their broken English, my limited Tagalog and their realization that the Kano was going to spent several thousand pesos, the required goodies were acquired. One of the staff even helped carry them back to the house.

By lunch time the intricacies of the conduit had been figured out and were starting to appear in the place of the old. Placement of the switches was next on the agenda only to discover that half of the cover plates didn’t match the switches. 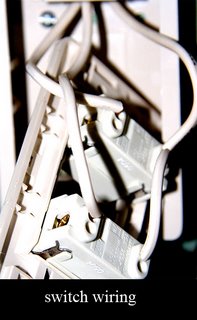 In the Philippines lunch time is sacrosanct and small businesses along with government offices close for an hour at midday. It was going to be 45 minutes before the switches could be replaced. Once they were replaced, the installation continued at a good rate and by 6pm we had lights down stairs with power in the kitchen and temporary lights and power upstairs.

Tuesday saw lights and power in the bathroom with the upstairs temporary connection being replaced with a permanent one along with power in the lounge room. By 3pm the tools were put away, the job was done at a cost of 4300 pesos (AU$120.00) and only three or four moments of intense expletives.
Posted by Henry Bateman