The Time to Act is Upon Us 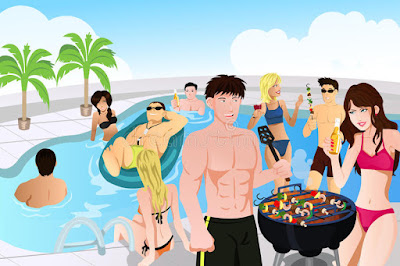 In amongst the sleaze and the glitter of his second memoir, the self- obsessed jester, Russell Brand, drops the observation; “Do we humans yet properly understand the notion of the future? It doesn’t seem that we do.”  Whilst written with a British tabloid audience in mind it is an equally pertinent character trait applicable to those of us who qualify as Scott Morrison’s “Quiet Australians.”

Take my mate Joe’s eldest son, a millennial father of three, all under 10, for example. Gifted a solar roof installation by an indulgent parent instead of doubled down of his good fortune, Joe’s son has elected to install a swimming pool in his postage stamp outer suburban backyard. This $30 thousand home improvement is justified by a) ensuring his offspring’s aquatic enjoyment is enhanced at this early age and b) how it will increase the resale value of his property. Consideration of the future advantages of electric power security is relegated to an afterthought that vies with dreams of being a contestant on a televised gymnastic game show.

This exhibit A in the Morrison catalogue holds its future in their own hands. Not so much at the voting booth but in their willingness to turn the ubiquitous they into a personal us. Like the pundits and the government there seems to be a reluctance to embrace this level of responsibility.

As the father of the Goons, Spike Milligan, wrote almost 50 years ago.

They chop down 100ft trees
To make chairs
I bought one
I am six-foot one inch
When I sit in the chair
I'm four foot two.
Did they really chop down a 100ft tree
To make me look shorter?

Yes Spike, I’m afraid they did. So, sit back, relax, put your feet up. Turn on the tennis. Oh, a politician has been caught with their fingers in till. Or as Mr Eliot so eloquently wrote a hundred years ago “another bank defaulter has confessed.” That will give the pundits something to jaw about. And a pandemic, well that’s not our fault. Fortunately, our world class medical profession is up to the task, they’ve won that match before and for the most part they’re steeped in integrity. So, “Don’t you worry about that.” BTW, who is this week’s winner of Australian Ninja Worrier?

Australia is a relaxed country, an indulgent country, we take great pride in our comfortable, laid-back reputation. Even a lucky country, if the success that’s been under pinned by the husbandry of our indigenous forebears can be called luck. Very few countries can boast the luxury of an honest low-level public servant bothering to contemplate the merits of personal battery storage or an inground swimming pool. Let alone purchase their considered preference secure in the knowledge that if they go with the luxury item the they will provide an uninterrupted power supply.

Well that is all about to change courtesy of global warming. And we must convince the they to adapt to climate friendly processes and products.

Our governments are struggling, they are not up to the job. For the most part their indulgence is just ours writ large. So, with the situation demanding we change our world, we must first change ourselves. Fortunately, that is something of which we are personally capable, should we so choose.

Not only must we stand up, we must also dismantle the chair. It is very close to its use by date. If we continue as we are, it will collapse with us sitting in it and that is going to hurt big time. If the current bushfires are any indication, we are even in grave danger of self-immolation. But for the they, if there is a profit to be made, making these chairs will continue to be their raison d’être. We need to tell them to stop.

And we must do it in a language they understand. From the homeless dole bludger begging in the street to the chairman of the mob who run the banks, our choices are either to forgo or become DIY experts. To move beyond fossil fuels, we must stop using petrol and become energy independent. If we do that, they will notice, and they will act.

The technology exists to do the latter, if not individually then in concert with our local neighbours. The first is the big ask. We need a transport system that matches our health system. A pedestrian lifestyle is possible in 21st Century Australia, especially in urban Australia, but it’s not all that easy. Although the more people who adopt walking as their primary mode of transport the easier it will become. The joy ride is over, it’s time to put away the toys and become serious.

Climate change has moved in and is here to stay. The future is today on steroids. And like all drugs it has side effects, some of which are deadly. And a tip for Joe’s son, when the time comes to upgrade your accommodation, a house independent of the grid will trump a swimming pool by noticeable order of magnitude. Don’t take my word for it, check out the man with the leather jacket’s response.

Henry Bateman
Henry Bateman is an artist and writer currently living on Whadjuk/Noongar country in Perth Western Australia. A return home after living in the Philippines for 10 years. The Ex Expat, is his blog about the arts (often) and politics (sometimes). His writing has been published by Crikey.com (Australia), Artslant (US), The Expat Travel & Lifestyle Magazine & The Expat Newspaper (both in the Philippines) and The Western Review (Australia). He has also had seven solo exhibitions and has had his work shown in 15 group exhibitions as well as 35 theater commissions as a set designer and/or lighting designer. He is currently attempting, with varying degrees of success, to live and enjoy a carbon free lifestyle.