Pop Noir with a Dash of Drama 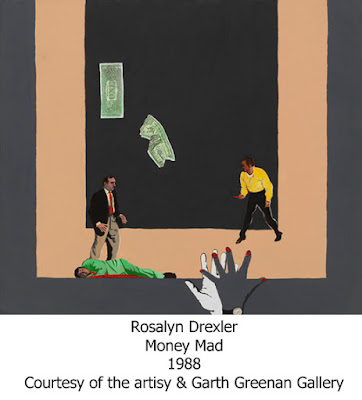 “Whatever I did, I did it to show myself! could do it.”
Rosalyn Drexler

The multi-talented, New York born Rosalyn Drexler is a novelist, a playwright with an Emmy and three Obie’s to her credit, a visual artist with over twenty solo exhibitions and for three months in 1951 she was the professional wrestler “Rosa Carlo, the Mexican Spitfire."

Drexler’s earliest art works were found object sculptures which were first shown at New York’s Rubin Gallery which closed shortly after and induced her to switch to painting.

As she told the Artblog “My earlier work was found object sculptures. I used to find stuff in empty lots and on the beach… Rubin Gallery lasted one to two seasons. You know why? The woman [who owned the gallery] showed her sister’s work. We [other artists] just came in. And nothing happened with her sister and then it closed… Women were not bankable at that time. Every other male artist…other galleries came along. I received no offers. In my naiveté I thought it was because I was not a painter so I must make paintings.”

The paintings Drexler made were brightly colored cartoon and film noir inspired works utilizing images taken from magazines and B movie posters which she would collage and paint over. Essentially self-taught, Drexler relates her style to the coloring books of her childhood.

As Hyperallergic’s John Yau reports her as saying “I adored my coloring books… I was addicted to outlining the pictures in contrasting colors, and enjoyed staying within the lines. Needed the control. My work begs for control. After all, I captured the images and buried them: now they want to escape. They lie layered and still, unable to move. They are contained and I can breathe a sigh of relief.”

Drexler’s dual interests in writing and painting have happily co-existed over the years although the influence of her theatrical knowledge and experience can be seen in her later paintings.

But as she told the New York Times’ T Magazine ‘‘I never wondered which was more serious. I was always so full of work and happy to be working. I was not thinking about my, quote-unquote, ‘career.’’’

And now at the end of her eighth decade, the Brandeis University’s Rose Art Museum has the retrospective exhibition Rosalyn Drexler: Who Does She Think She Is? on show until the 5th of June. 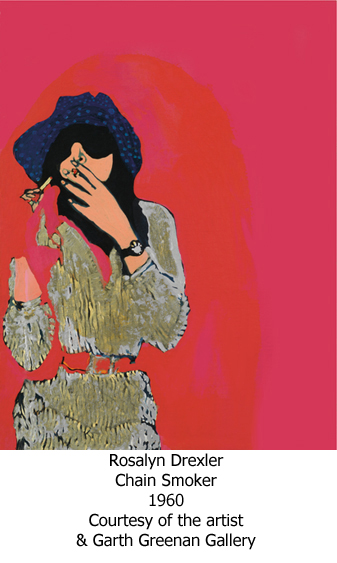