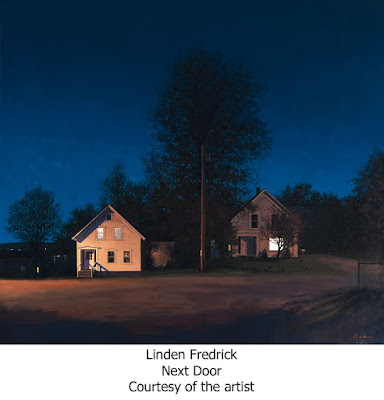 “Where would you like it to be?”
Linden Fredrick

The American landscape painter Linden Fredrick creates almost anonymous scenes of the rural built environment, often at dusk, devoid of the human figure. Although humanity has a strong implied presence in his paintings often presented as a welcoming lighted window to entice the weary traveler. Unlike the works of the famed American artist Edward Hooper to whom Fredrick is often compared; a comparison that is more about style than intent.

As Fredrick explained in a promotional video for Haynes Gallery “I always felt that once a figure, a person is in the painting then that painting becomes about that person and what is that person’s story. But when you take that person out it becomes the viewer’s story and to viewers that’s a lot more interesting.”

A dedicated cyclist Fredrick discovers many of his subjects whilst out riding, a practice that allows him the time to experience the passing parade more intimately than from the window of a motor car and with a greater range than walking can provide.

Fredrick is also an amateur musician with an ongoing interest in stringed instruments. He makes cellos and is teaching himself to play the violin and it is an interest that affects his painting.

About which he said in a Forum Gallery promotional video “I think the correlation between music and my work is a good analogy because there are harmonies, there is an aesthetic, a mood.”

Using a palette limited to three colors from which he mixes all the colors needed for a painting, thus creating the harmony that holds his work together and provides its atmosphere.

As he says “I deal with what’s called a triad in which I think about only three colors. It’s like chords in music, so you take the key of C and there’s three major members of that. I do the same thing with painting and it’s based on the same kind of mathematical form.”

But unlike the musician who uses sound to provoke an experience, Fredrick uses paint.

As he has explained “It’s about where people live and work. It’s a lot about the road, what we all see as everyday places. It’s also seeing the extraordinary in an everyday place.

His current exhibition Linden Fredrick: Roadside Tales is on show at Pennsylvania’s James A. Michener Art Museum until the 13th of March 2016. 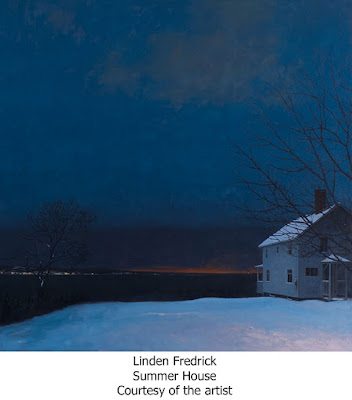