Going to the Mountain 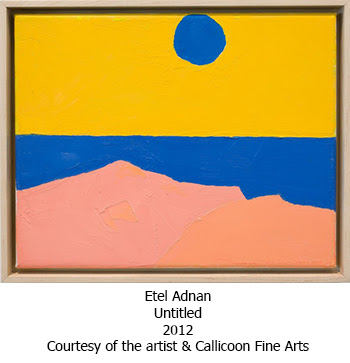 “There’s an innocence to a painting
that we don’t want to touch w
ith words.”
Etel Adnan
The Art world can become a very demanding place when it decides it likes you, everyone wants a piece of the action as the philosopher/poet/painter Etel Adnan has recently discovered. Three years ago at dOCUMENTA(13) her abstract landscapes were discovered and since then she has had exhibitions in New York museums and galleries, London galleries and Doha’s Mathaf: Arab Museum of Modern Art.

And the stress of being pulled in so many directions at once is starting to take its toll. Adan told the Wall Street Journal that she is considering taking a break from painting, as she said “It’s as if I can’t see color anymore.”

Adnan took up painting in her mid 30’s as an adjunct to her teaching and writing. As she explained to an Artsy editor “My writing and my painting started totally independently. I studied literature and philosophy at three different universities, and never went to art school. When I was teaching in a small college in California, in 1959 exactly, the head of the art department encouraged me to paint, as I was teaching Philosophy of Art (among other courses), and she said, “How can one teach about art without practicing it?” In a short while after I drew on small pieces of paper, then painting on small pieces of linden practically picked up from the floor, she decided that I was a painter. The two practices have remained independent, although on leporellos I write poems that I mix with inks and watercolors, but when I do it I still function as a painter.”

In an environment that is usually enthralled by the big and shiny Adnan is somewhat of an enigma with her small semi abstract and abstract paintings that often feature her beloved Mount Tamalpais. As she says “Mount Tamalpais, in the north of San Francisco, has been something like the pole of my life, for half a century now. But I don’t paint it exclusively. Some of my works are purely abstract, some make one think of nature without showing a landscape, some are related to that part of California where I spent most of my life. There is more to a painting than what the painter thinks she or he is doing, and more than what a viewer will see. It’s endless, that’s what makes it what we call art.”

Adnan’s current self-titled exhibition is on show at the Irish Museum of Modern Art until the 13th of September. 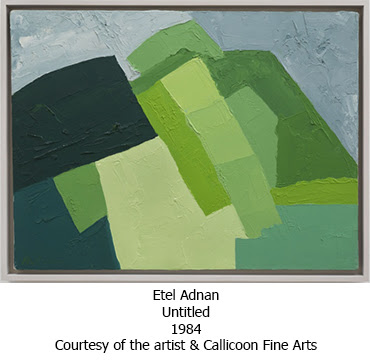