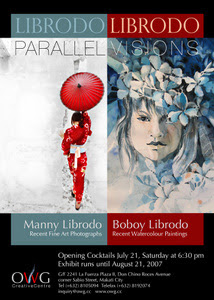 Had the good fortune to attend the opening of Parallel Visions at the OW Gallery last night. An exhibition of some stunning photographs by Manny Librodo and interesting water colours by his brother Boboy Librodo.

Well, last night I found out, a different body of work that truly showed off his skill as a figurative photographer. His photographs of The Buddhist Monks, A Man on a Boat with Oar and the Woman in Red Kimono with Umbrella where the stand out pieces for me, with the Woman in a Red Kimono being the show stopper.

The Woman in a Red Kimono is a powerful work that invokes a series of questions not only about being an Asian woman but every woman with the form of the work underpinning its content. A Man on a Boat with Oar addresses the same issues but from a male perspective but a less harmonious interaction between form and content render it less effective. Then there is the dark and brooding photograph of the Buddhist Monks with its golden line depicting a partial outline of one monk which alludes to enlightenment very effectively.

Manny’s brother Boboy has a series of 7 water colours completed in the past couple of months hanging in the second exhibition space at the OW gallery. Water colour is an unforgiving medium that requires deftness of technique to be successful. I found Boboy’s approach to be tentative and explorative. That being said the abstract elements of his work work well with Still Life in Red in which form and content compliment each other to produce a well resolved piece.

If you’re in Manila do take the opportunity to see Parallel Visions at the OW Gallery, cnr of Sabio St and Don Chino Roces Ave, Makati City, it is well worth the effort.
Posted by Henry Bateman