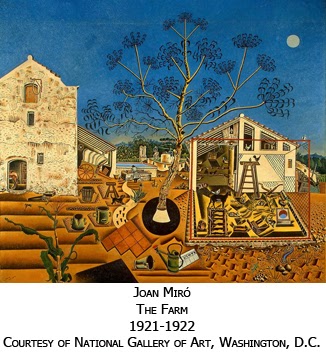 The Spanish artist Joan Miró was yet to embrace the principals of surrealism when he arrived in Paris in 1920. And after a disastrous exhibition the following year he returned to his family’s farm in the Spanish town of Mont-roig del Camp. During the summer there and the following winter in Paris Miró painted The Farm, which the second director of the Solomon R. Guggenheim Museum, James J. Sweeney described as the "key work of the artist's later development."

The American writer and Spanish aficionado Earnest Hemingway brought the work as a birthday present for his wife and is reported as saying “It has in it all that you feel about Spain when you are there and all that you feel when you are away and cannot go there. No one else has been able to paint these two very opposing things.”

The Farm also contains all the prototypes of the symbols that were to infuse Miró’s later works when in 1924, after becoming friends with André Breton; he began to investigate the surrealist movement’s principals. Although never becoming an official member of the movement, Miró’s interest in symbols and the poetics of painting was a good fit with the surrealist’s dream-like automatism.

It was an engagement that saw Miró develop his unique visual vocabulary that he used to great effect in not only his painting but also his sculpture, printmaking and ceramics. As he is quoted as saying “My way is to seize an image the moment it has formed in my mind, to trap it as a bird and to pin it at once to canvas. Afterward I start to tame it, to master it. I bring it under control and I develop it.”

With his invented forms rooted in the natural world not only does their juxtapositioning create meaning but Miró’s masterful use of color has enabled him coral them into a state where less becomes more. As he has said “Little by little, I've reached the stage of using only a small number of forms and colors. It's not the first time that painting has been done with a very narrow range of colors. The frescoes of the tenth century are painted like this. For me, they are magnificent things.”

Miró’s continuing popularity along with his influence on a wide range abstractionist disciplines has ensured his legacy will be as long lasting as his Spanish compatriots ranging from El Greco to Picasso, from Goya to Dali.
And as he has said, “In a picture, it should be possible to discover new things every time you see it. But you can look at a picture for a week together and never think of it again. You can also look at a picture for a second and think of it all your life.”

His current exhibition Joan Miró: Oiseaux dans L’Espace is on show at New York’s Nahmad Contemporary until the 13th of June. 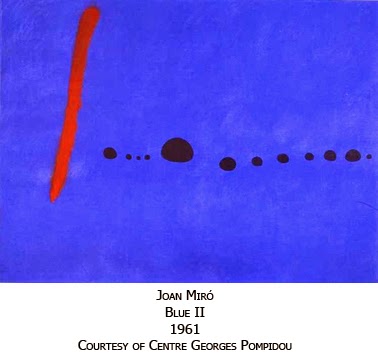 Get professional trading signals delivered to your mobile phone daily.

Follow our signals right now & profit up to 270% daily.