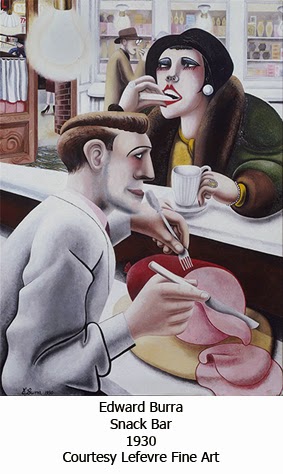 The British painter Edward Burra was to all intents and purposes was a cripple and whilst not confined to a wheel chair he was chair bound. From childhood he suffered from rheumatoid arthritis and a blood disorder that induces anemia. Due to these afflictions he could only observe a world in which he couldn’t fully participate and observe that world he did.

Painting with watercolor, he was physically unable to meet the demands of painting in oils and forced to paint sitting at a table, Burra’s paintings are vibrant reflections of the world that swirled around him. From his Paris and New York paintings with their sexual illusions and celebration of Jazz and B grade movies of his youth to the English landscapes of his latter years with their environmental concerns, Burra’s watercolors are mostly drenched with a strong use of color.

Between these two bodies of work Burra painted dark and foreboding, almost at times surreal, depictions of a world ravaged by war. As a child he experienced WWI, was in Spain at the start of their civil war and lived in the coastal town of Rye, the front line in the Battle of Britain, during WWII.

Blessed with an almost photogenic memory, Burra never made sketches from life. He would return to the family home after his travels to recuperate and create his pictures. Burra’s love of the cinema and theatre in all its forms (opera, ballet, drama and comedy) saw him also design stage settings and costumes that were, even for him, reproduced on a massive scale.

Described by the Jerwood Gallery as “one of the most enigmatic and intriguing British artists working during the 20th Century,” Burra’s reluctance to talk about his work helped to maintain the mystery. In a rare interview, said to be the only one, with the BBC, Burra did say “I never tell anybody anything – so they just make stuff up – I don’t see that it matters.”

An exhibition of Burra’s work A Rye View is currently on show at the Jerwood Gallery in Hastings Old Town until the 7th of June. 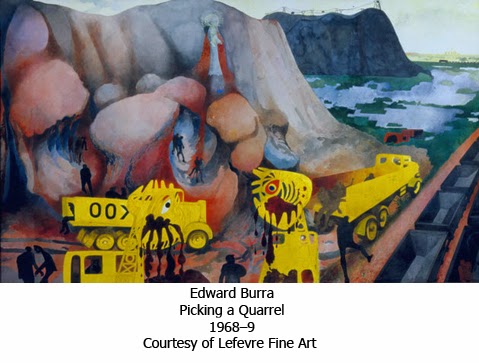 At Free Bitcoin you may recieve free satoshis. Up to 22 satoshis every 5 minutes.

Did you consider choosing the best Bitcoin exchange service: YoBit.

Ever try to automate your free bitcoin claims with a BTC FAUCET ROTATOR?