Alain Bali is a photographer obsessed with color, so much so that he invents his own color rainbow. Currently utilizing Photoshop's CMYK channels and the blur and contrast tools he creates his images from photographs captured on film.

Prior to being rescued by the digital darkroom Bali shot in black and white and colored his images with the use of chemicals thus avoiding the standard "canned colors" designed by Kodak and company. He searched old chemistry books and pulled out toning formulas, intending to colorize black and white paper, sandwiched together 4x5 black & white films and used a Chloric and Nitric acid mixture to carve the gelatin to apply organic dyes in layers. The result was amazing one-off prints that were never reproducible. 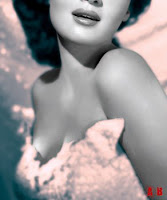 Bali was introduced to photography through his father who took so long framing the family snapshots that the subjects wandered away. He took over and taught himself camera technique, to always be prepared, to be fast and which the best angles were. At university he studied philosophy with his doctoral thesis being on "the image as language".

Growing up in Europe Bali was immersed in strict concept of art photography being black and white, taken on Tri X film, processed in D76 and printed Agfa Bromura #3. Color was regulated to documenting reality, not Art. A major influence for Bali at this time was William Klein for whom he printed the master's images from Tokyo and New York. Bali was able to spend days in the darkroom working on just one image, wasting boxes of paper until the 'perfect print' emerged.

In 1983, Bali left France and moved to the US and current resides in Los Angeles where for the last 15 years he has been shooting movie posters. He has made his living for all of his working life from photography and philosophizes "If you intend to live off your photography, you have to shoot like a mercenary and be flexible enough to cope with lame art directors."

Fortunately these days are behind him and now he can concentrate on his art as seen here and on his web site www.alainbali.com
Posted by Henry Bateman